UP: Hindu Jagran Manch in Unnao wrote on the walls of the city – it is strictly forbidden to set up shops for non-Hindus, wall painting in controversy 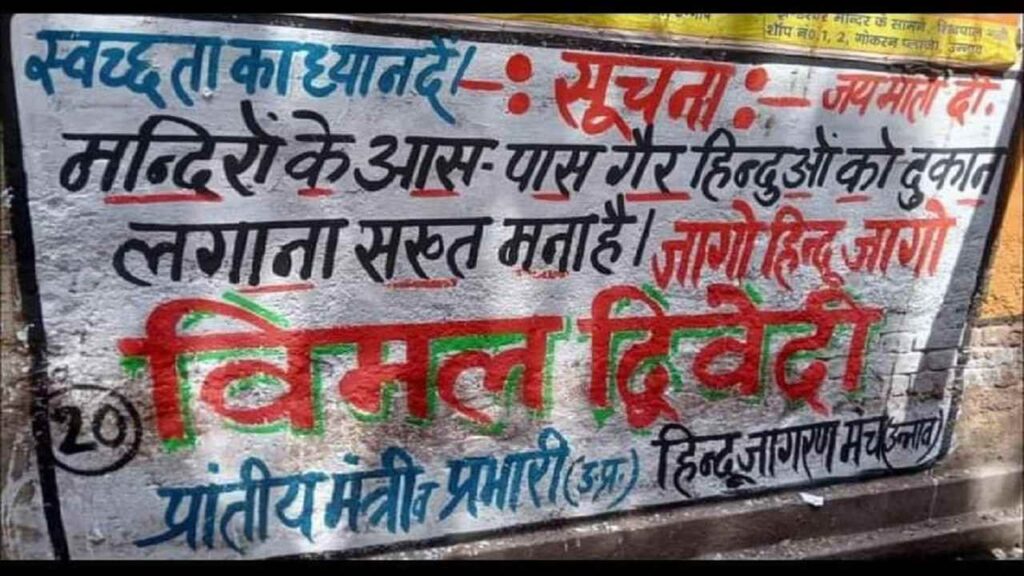 Unnao is known by the name Ganga Jamuni. At the same time, it seems to be growing in two camps. Because wall painting has been made on the walls of the city by Hindu Jagran Manch, which remains a topic of discussion these days.

Hindu Jagran Manch has warned of running a campaign.

Vimal Dwivedi, the Provincial Minister of Unnao’s Hindu Jagran Manch, had recently raised a memorandum to the Unnao district administration demanding that non-Hindu shops be set up around the temple and the Manch had lodged an objection to non-Hindu shops being set up. At the same time, wall paintings on the walls by Hindu Jagran Manch are now a topic of discussion. It has been written in the wall painting that the information should pay attention to cleanliness and it is written below that it is strictly forbidden to set up shop of non-Hindus around the temples. Jago Hindu Jago Vimal Dwivedi Provincial Minister Hindu Jagran Manch, wall painting has been done on many walls written in this way.

At the same time, when Hindu Jagran Manch’s Provincial Minister Vimal Dwivedi was talked about on this matter, he told that wall painting has been made by Hindu Jagran Manch itself, Hindu Jagran Manch is continuously campaigning for the safety and cleanliness of temples. And has been working for cleanliness. In the past it was seen that a madman had gone inside the temple with a pistol and broke the donation box and created chaos, such people sit around our temples or when there are religious festivals then non Hindu and people of a particular community in temples around, and set up their shops. There is a gathering of chaotic elements at those shops, those who come with us devotees, sisters and daughters come, splatter on them somewhere. There are incidents of looting around temples, Hindu Jagran Manch has been demanding that there is liquor, meat and chaotic elements around temples, such people who do not have faith in our Hindu deities, they will not set up any non-Hindu shop 200 meters from the temple, It should be banned completely.

Chaitra Navratri has great importance in Hinduism because from this day the Hindu New Year i.e. Nav Samvatsar also begins. He has demanded the removal of liquor and meat shops from all the temples and religious places and educational institutions (schools and colleges) in the district. Apart from this, the administration has also demanded to shut down illegal slaughterhouses and shops selling and slaughtering animals in the open by running a campaign. At the same time, from the point of view of security, there has been a demand for ban on setting up of shops of non-Hindus up to 200 meters outside all the temples (temple premises) of the district.