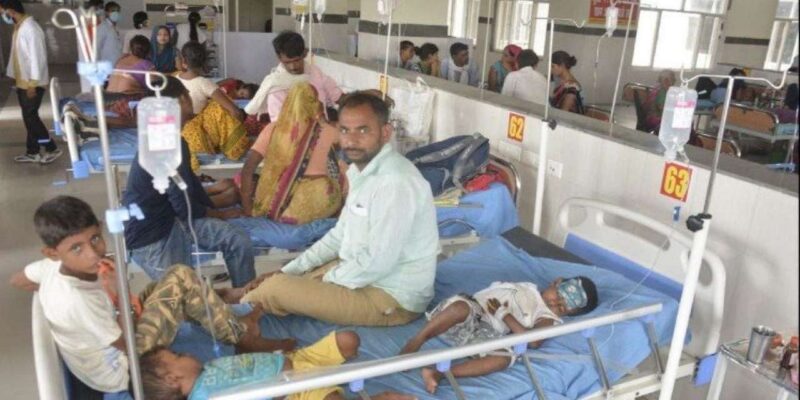 The havoc of deadly fever continues in Agra.

Deadly fever continues to wreak havoc in Agra district of Uttar Pradesh and seven children died of fever in Fatehabad tehsil area on Tuesday. This includes one girl in Fatehabad, two in Dauki and two girls in Dhanauli, one each from Pinahat and Barhan. Along with this, a woman has also died due to fever in Burj Atibal of Barhan.

According to the information, three-month-old Nivedita, a resident of village Nagla Lohia Ucha Bali in Fatehabad area, got her fever tested. But after getting tested in three pathologies, different reports of platelet count in the blood came. After this, he was being taken to Agra when his condition was critical, but he died on the way.

Many villages of Agra are in the grip of fever

At the same time, Sadhna (14-year-old), daughter of Ratan Singh, resident of Thar village of Ramphal under Dauki police station area, had fever two days ago and the family took her to Agra for treatment, but she also died during treatment. While 13-year-old Deepu Ki, a resident of Ghari Chandan village in the same police station area, also got fever and the family members were treating him with a doctor, and he also died on Tuesday.

Kalua, the eight-year-old son of Ravi, a resident of Nagla Bichiya Wali Basti of Dhanauli, died on Tuesday. Kaluva was having fever since Sunday. Whereas the seven-year-old daughter of Ramveer Prajapati, a resident of Azizpur in the district itself, Deepa has also become a victim of fever and there is news of her death due to fever. She was ill for the past one week.

According to the information, two-and-a-half-year-old Bokaran of Khemchandra in Khedi village of Barhan was suffering from fever for three days and was admitted to a private hospital in the city and died due to fever on Tuesday. Along with this, Bhuli Devi (50), a resident of village Burj Atibal, also died of fever. While one-year-old daughter of Pinahat town resident Shakir Sanja died of fever on Tuesday. She was suffering from fever for three days and the people of the house went to Gwalior for her treatment.

Health department is kind to the doctors

According to the information, there are fever patients in every house of Barhan village and many houses have died due to fever. But no help is being given from the health department. Due to which people are relying on frivolous doctors. The health department has not yet conducted an inquiry on the complaints received in the village regarding fever.

Also read- To get justice, the ashes of farmers will go to every district of UP, will be immersed on October 24

Also read- Then the Bihar connection of the terrorist came to the fore, the address of Kishanganj is written in the fake identity card of Ashraf caught in Delhi

In the middle match, the fans created a nuisance, after scoring the goal, the players hit the bottles, the team left the field