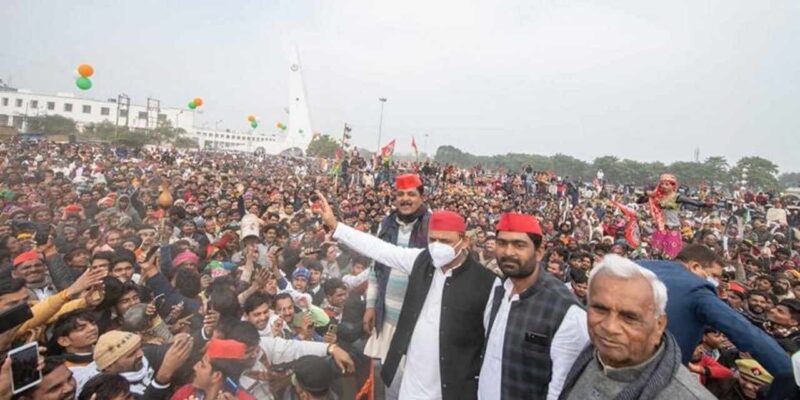 Former Uttar Pradesh Chief Minister and Samajwadi Party President Akhilesh Yadav is going to have a big public meeting in Saharanpur today. This public meeting is being considered very important in the midst of the farmers’ agitation and the Lakhimpur Kheri violence. At the same time, it is also being seen as the beginning of SP’s assembly elections. It is believed that through this rally, the SP chief will reach West Uttar Pradesh and show his strength in the Jat land.

On the 100th birth anniversary of former minister Chaudhary Yashpal Singh, SP President Akhilesh Yadav will pay floral tribute by reaching his samadhi site in Teetro and after that he will address this rally. The leaders of the Samajwadi Party have been preparing for the last one month to make inroads in western Uttar Pradesh. According to Akhilesh Yadav’s schedule, he will land at the helipad at Ravi Chaudhary’s farm at around 12.15 pm by helicopter and from there he will reach the venue by car. The convener of this rally, Chaudhary Indrasen told the officials that all the senior party workers will handle the system with full discipline and the list of workers deployed in the arrangement of this rally will be made available to the administration. SP claims that all the preparations regarding the rally have been completed and the rally to be held in West Uttar Pradesh will be historic. SP leaders say that more than one lakh people will reach this rally.

Leaders visited to make the rally a success

On Saturday, SP leaders visited many villages of the area to make the rally in Deoband of Saharanpur successful. SP leaders have asked all the workers to come to the rally and have appealed to reach in maximum numbers. SP leaders claim that the rally before the election of the party chief will be historic and through this rally the strategy for the upcoming assembly elections will be prepared.

In fact, this rally is being considered very important from the point of view of elections. Because protests by farmers and farmer organizations are going on in the country regarding agricultural bills. On the other hand, the farmers of western Uttar Pradesh are leading this movement. Therefore, today the SP President will try to mobilize the farmers through this rally. In fact, through the rally to be held in Saharanpur, the SP is working on the strategy of cultivating the politics of Shamli and Muzaffarnagar districts.

Also read: UP Election 2022: Owaisi ready for alliance with Akhilesh Yadav, only one condition- Muslim face will have to be made Deputy CM