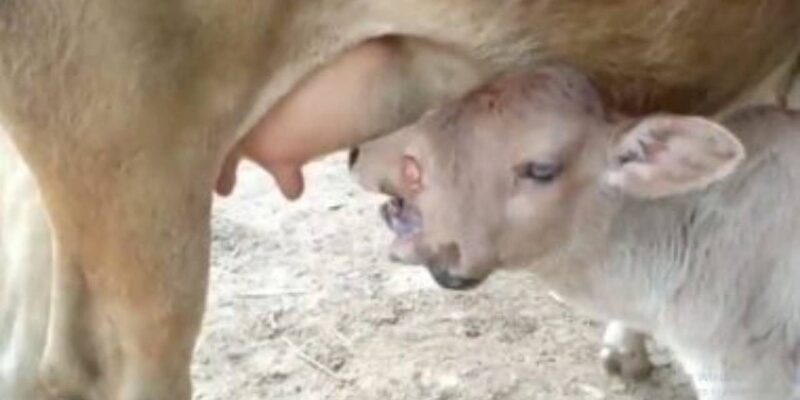 Considering this calf born in the month of Navratri as a goddess, people started worshiping it.

Often we get to see such things in the world, which take anyone by surprise. These days a similar news remains the reason for the interest of the people. If someone asks you, have you ever seen a calf that has not one but two heads? So it is obvious that your answer will be no. But a calf has been born in Odisha, which has not one but two heads. That is why now this calf has become a topic of discussion across the country.

According to a report, a two-headed and three-eyed calf has been born in Odisha’s Nabarangpur, which is getting crowded to see. On the other hand, in the month of Navratri, people are worshiping the cow as an incarnation of Goddess Durga for giving birth to a two-headed and three-eyed calf. People believe about this calf that it is an incarnation of Maa Durga.

The cow that gave birth to a calf was bought by Dhaniram, a farmer living in Bijapur village of Kumuli Panchayat of Nabarangpur district, two years ago. When the cow gave birth to a calf, the farmer saw that the child had two heads and three eyes, not one head. After a while, when the people of the village came to know about this, people started worshiping the calf born in the month of Navratri, considering it as an incarnation of Mother Durga.

Dhaniram’s son told that the calf is having trouble drinking milk from the mother due to having two heads, so milk for the calf is being bought and fed from outside. At the same time, the video on social media has also gone viral on the birth of a calf with two heads and three eyes in Odisha. Let us tell you that before this a three-eyed calf has been born in India too. This news also made a lot of headlines in India because many people across the country were considering this calf as an incarnation of God.

Also read: This man kept so many eggs on his hat that the record was made, you also see this amazing video

Also read: As soon as she opened the bathroom door, the woman saw the python, screamed out of fear

Your date of birth is wrong in PF records? Now you can update from home; learn how