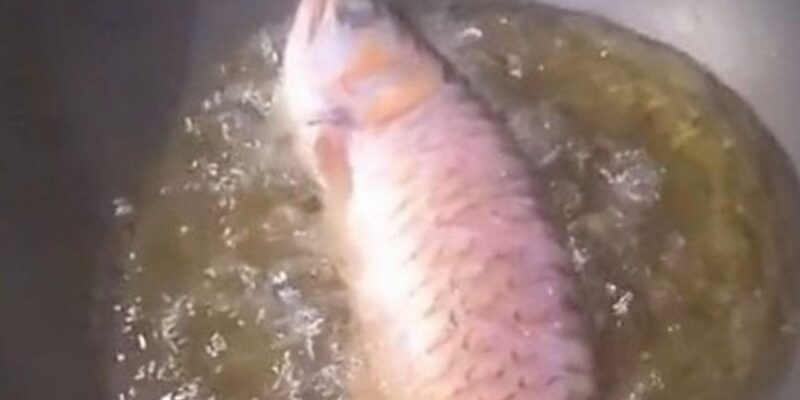 There is often a rift between husband and wife over some issue or the other. But despite all this, love remains between the two. But there are some couples who keep things in their heart. This later creates sourness in the relationship. But a woman has given such pain to teach her husband a lesson on a little thing that now there has been bitterness between the two of them. Let us know what is the whole matter.

A woman has shared a video on her Tiktok account while frying fish, which has gone viral. It has been viewed more than 40 lakh times so far. Now you must be thinking that what is there in this, which is going viral. Actually, this fish was not such a fish. This fish was the pet fish of this woman’s husband, which was very dear to her. The woman asked her husband to clean the fish tank. But when she refused, the woman did such a dirty act to teach a lesson to her husband.

According to the report of the website Daily Star, Mia Kurniawan says that she was asking her husband to clean the tank for several days. According to her, the husband was very fond of pet fish, but whenever she asked him to clean the tank, he refused. Due to this the woman got so irritated that she took out the fish from the tank and fried it after applying turmeric-spice. Not only this, he made a video of it and uploaded it on Tiktok which has now gone viral.

Seeing his beloved pet fish frying, the husband became very sad. He was crying intermittently. He still cannot believe that the wife can do this to avenge that thing. However, Mia has also clarified after the video went viral. He says that the fish had become ill, so he cooked it and ate it. The husband was broken after this accident. But there is also news of reconciliation between the two.

Also read: This man was upset with his relationship, said – Girlfriend embarrassed in front of friends

Now the doctor will appear in front of Harbhajan Singh’s name, the French university gave this special honor to the Indian off-spinner