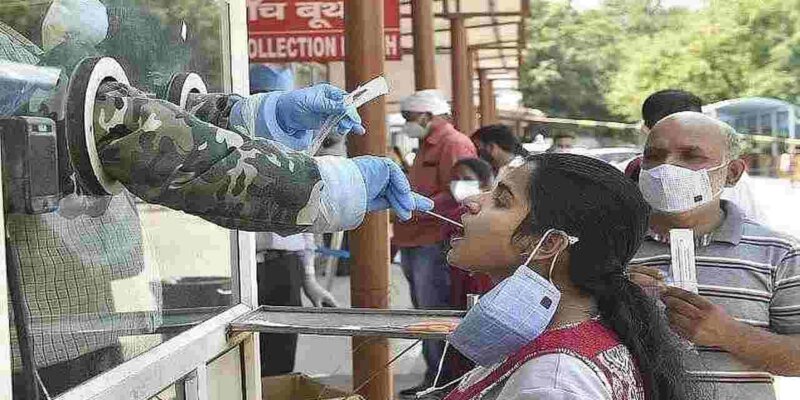 Uttar Pradesh, which has a population of about 240 million, has proved to be better than European countries in controlling the corona epidemic. Developed countries like Germany, France and UK, which have a combined population of about 215 million, even today, about 50 thousand new cases of corona are being reported every day. But in UP this number is less than 50.

Corona Pandemic came in front of everyone as a disaster that had not come in the last 100 years. The poor and small countries of the world were battling this epidemic, but the condition of those countries was also bad, which calls themselves so-called developed and superior. The situation in India and especially in Uttar Pradesh has been under control compared to the number of victims and deaths due to corona in America and Britain. But the surprising thing is that thousands of new corona patients are still being found every day in UK, France and Germany, which are considered rich countries of Europe, whereas in UP even double digits are not met. Perhaps this is the reason why UP’s model of corona control has received worldwide applause.

NewsNCR Group CEO Barun Das says that, from the governance front, handling the Uttar Pradesh government would be equivalent to handling the governance of the 3 largest countries in Europe. The population of UK, France and Germany is less than that of Uttar Pradesh. That is, the work that Angela Markle, Boris Johnson and Emmanuel Macron do, Yogi Adityanath does the same work alone. Speaking at the power conference of NewsNCR held in Lucknow, Barun Das said that I believe that what Yogi Adityanath did in the last four and a half years can become a case study of Howard’s business school.

Uttar Pradesh, which has a population of about 24 crores, where less than 50 coronavirus cases are coming every day. Many districts of Uttar Pradesh have now become completely corona free. According to the data released on Tuesday, only 21 new corona viruses were found infected in the last 24 hours. Whereas on Monday, this number was only 16. On the other hand, if we compare Uttar Pradesh with the best European countries with population of Germany (841 million), Britain (682 million), France (6.54 million), whose combined population is about 215 million. Where more than 50,000 corona cases are being reported every day, Uttar Pradesh seems to be in a much better position. Let us know how this was possible.

If we talk about the figures till October 4, the number of new corona patients in the United Kingdom, a country much smaller than UP, was 34 thousand 256, while the death toll was 33. While the total cases have come to more than 79 lakhs so far and the death toll is beyond 1.37 lakhs. Similarly, Corona is not over in France yet. Although the number of new patients in France is very less, 1138, but the death toll (50) which still remains a matter of concern here. Whereas if we look at the total COVID cases of France, then this number is beyond 68 lakhs and the death toll from Corona is also beyond 1.14 lakhs here. The same is the case with Germany. The figures till yesterday show that the number of new patients here is 4507. While the death toll is 89. On the other hand, if we look at the total number of corona patients in Germany, then it is beyond 42.55 lakh and the number of people who died of corona here is beyond 94 thousand. These are the countries of Europe which are considered rich and powerful countries. These countries have miles ahead of India, especially Uttar Pradesh, in terms of knowledge, science and health services.

Vaccination model of UP better than European countries

In the case of corona cases or deaths due to corona, where Uttar Pradesh has proved to be better than these European countries. At the same time, in the matter of vaccination also, UP has performed well. If we look at the statistics of vaccination till October 5, it is found that where Germany, France and UK have given 10,81 crore, 9.45 crore and 9.39 crore vaccine doses to their citizens respectively till October 5. On the other hand, Uttar Pradesh has set a new record by giving more than 11 crore vaccine doses to its people till October 5. It is being estimated that in the coming ten days, India will cross the figure of 100 crore vaccines.

At present, the number of active corona patients in the country’s largest state with a population of about 24 crores is only 158. In the case of active cases of Corona, Uttar Pradesh’s number comes at 26th position in the country. In the last 24 hours, 1.36 lakh people were tested for corona in the entire state, out of which only 16 new corona infected have been found. These 16 infected have been found from 8 districts of the state. In which 8 new patients have been found maximum in Lucknow. Two more corona infected have been found in Jhansi and one each in Prayagraj, Ambedkar Nagar, Jaunpur, Barabanki, Farrukhabad and Mainpuri. A total of 17.09 lakh people have been infected with corona in the state so far. Out of this, 16.68 lakh people have been cured. At the same time, the number of people who lost their lives to Corona in Uttar Pradesh is 22,894. At present, there are less than 5 corona patients in 68 districts of the state.

The UP model has become an example during the Corona period. When we compare UP with the affected people in other states of the country, it comes to know that how much better the condition of UP was than Maharashtra, Kerala, Delhi etc. The state has proved to be number one in the vaccination campaign. By forming Team 11 or setting up the COVID Care Fund, the state government has gone miles ahead in COVID control from many states. WHO has also praised the UP model of corona control.

The great model of ‘Triple C’

The model of ‘Trace Test and Treat’ Uttar Pradesh played the most important role in controlling the coronavirus. The Uttar Pradesh government is getting more than one lakh COVID samples tested every day by 8000 rapid response teams in rural areas through monitoring committees. At present, more than 73 thousand monitoring committees are working in 97941 villages in all 75 districts of the state. Along with this, the emphasis on testing also helped a lot in getting Uttar Pradesh out of the havoc of Corona.

US Deputy Secretary of State Wendy Sherman on India visit, will discuss many issues including Afghanistan with Foreign Secretary

Kashmir again shaken by the sound of gunfire, three terrorist attacks within an hour, 3 civilians lost their lives

DSSSB Admit Card 2021: Admit card issued for recruitment examination for many posts including Delhi Junior Clerk, download like this