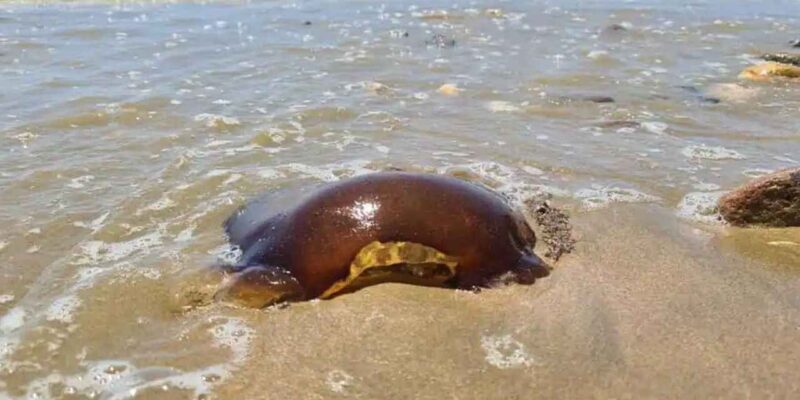 This mysterious creature appeared on the coast of Australia

A strange mysterious creature of brown color has appeared on a beach in Australia. Everyone is shocked after seeing this creature. Some pictures of it have been shared on a Facebook page named Australian Native Animals, which is going viral. Everyone is asking the same question that what is this after all.

According to the information, people had seen this mysterious brown creature in the southern part of the Great Barrier Reef of Queensland. After the pictures of the creature went viral, everyone is sharing it on their social media platforms. Sharing three pictures of this strange creature, Charlene Gwyneth Mae on the Australian Native Animals Facebook page wrote in the caption, ‘A friend of mine shared this on his Facebook page. Does anyone know what this is? My friend says it looks like a jellyfish. Giving further information, Charlene has told that this creature has been found near the Kemp beach in Yeppoon Kild.

This post of Charlene has now gone viral. People are constantly giving their own feedback on this. One user commented and wrote, ‘Yes, it could be a jellyfish. Looking at it, it looks like it has got sunburned. At the same time, some find this creature to be a lump of shark eggs, while some are finding it to be a tomato jellyfish or a blob fish. However, a user says that this creature can be seen on Yeppoon and Kauai Bay beach. Some users have given the exact same information about this creature, which experts are also telling.

After the matter surfaced on the Internet, experts have also started telling about it. Marine biologist Dr Lisa Ann Gershwin, co-founder of the Jellyfish app, says that this mysterious creature is most likely to be a lion’s mane cyanea barkeri jellyfish. He told that in 2010 he himself discovered this species. The color of this type of creature is chocolate brown. It is found throughout Queensland.

Also read: As soon as she opened the bathroom door, the woman saw the python, screamed out of fear

Vegetable prices skyrocketing in Mumbai! Know when it will be cheaper now