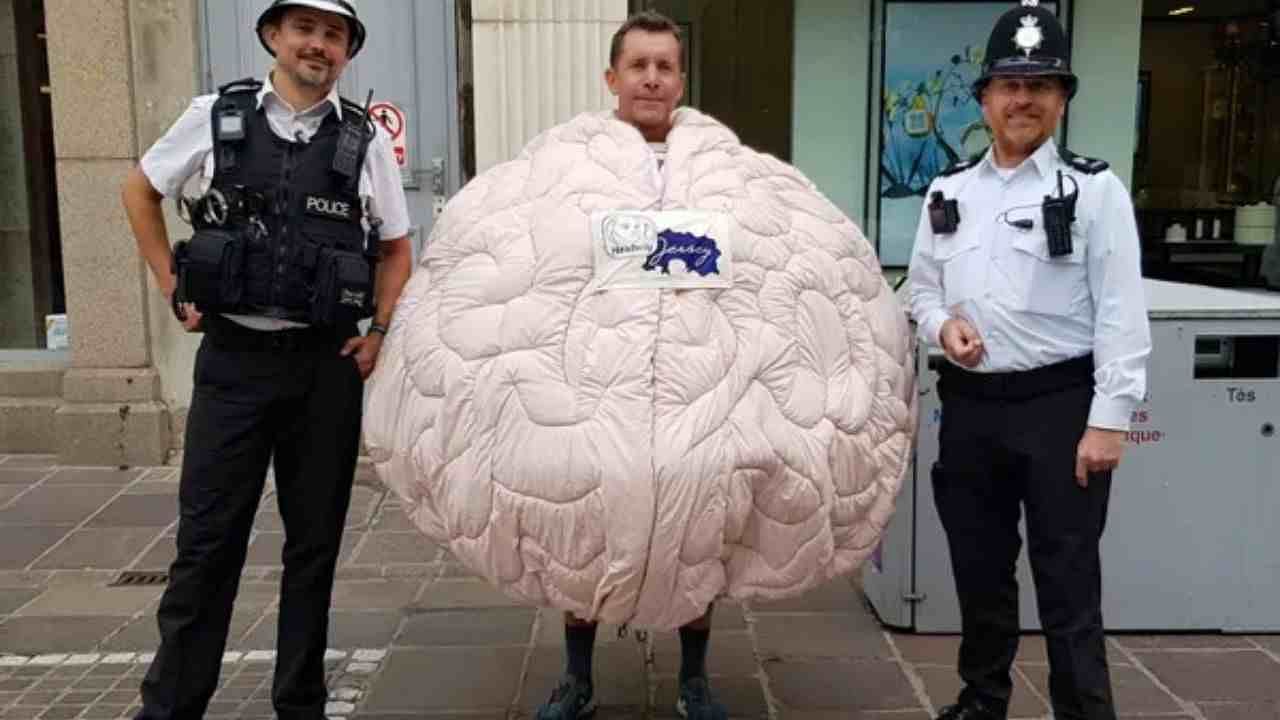 Talking about the Guinness World Record, everyone wants to show their talent and get their name registered in this book. Now in this episode, a British person is aiming to get his name registered. In the post going viral, a man is wearing a brain costume.

This person wants to make a Guinness World Record

A lot is seen on social media, many posts become viral as soon as they come on social media. Talking about the Guinness World Record, everyone wants to show their talent and get their name registered in this book. Now in this episode, a British person is aiming to get his name registered. In the post going viral, a man is seen wearing a brain costume.

In fact, fund raising manager Bryce Alford has been seen on the streets of England in his full-body brain costume. He even took time out from his practice run to pose for photographs with the officers of the St. Helier Township Policing Unit. Now the police unit has shared a picture of Bryce Alford with two of its officers on the social media platform Twitter account.

Sharing the picture, he wrote in the caption, ‘Today, Bryce Alford, Officer of St Hilliers in King St, who is the fund raising manager of Hadaway Jersey, all the officers met him. Bryce Alford A marathon will be held in London on Sunday, 3 October, in which Bryce Alford will be seen wearing Brain’s costume and will also be seen breaking the Guinness World Record.

Our St Helier Officers bumped into Bryce Alford (Fundraising Manager) @HeadwayJersey on King St today, Bryce will be running the London Marathon on Sunday 3rd October dressed as a brain in an attempt to break a Guiness World record. pic.twitter.com/aX69RHr4eU

Bryce will run the London Marathon on October 3, but he aims to break the Guinness Record for the fastest marathon ever designed as a brain. Let us tell you that according to media reports, his previous record was the fastest running on a treadmill in the year 2003, which was 1000 km.

The brain costume that Bryce Alford is wearing weighs 7 kg. He told that it was made by his two friends. Those who have brain injury, it shows how they feel. Bryce Alford told ITV NEWS, ‘What I hear over and over again is that people think they’re stuck in their own mind, so when you see me inside the costume you’ll see exactly how it is. It can be felt if you can imagine the pressure.’

The bike rider came under the speeding bus, but then what happened was nothing short of a miracle, watch the creepy video

Fans Reaction: After the Income Tax raid at Sonu Sood’s house, the fans of the actor got angry, read this special tweet