This agricultural institution of the British era is bringing a big change in the lives of farmers, it is also playing an important role in removing unemployment. 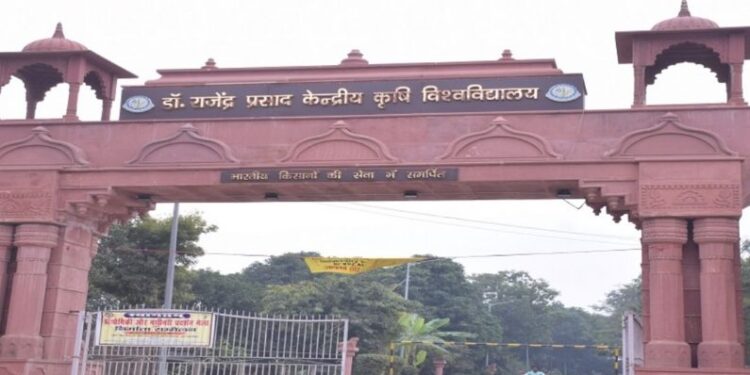 The Vice Chancellor says that through the schemes of the Prime Minister, every village should be connected with the scientists of the university so that the same crops can be cultivated here, so that the lives of the farmers can be changed and unemployment can be reduced.

Many years before independence, the Imperial Agriculture Research Institute, which was established by the British in 1905, has started coming into its true form by becoming a university. Everything has changed since Prime Minister Narendra Modi created the Central University. Till a few years ago, this university, weeping over its helplessness, is now ready with a new attitude.

Dr. Rajendra Prasad, who studied from IIT, Vice Chancellor of Central Agricultural University Pusa, Samastipur, Dr. Ramesh Chandra Srivastava has done research in many new disciplines. In view of his ability, the President has made the Vice-Chancellor here.

Dr RC Srivastava is originally from Ballia district of Uttar Pradesh. As soon as he arrived, he first laid emphasis on Biglind and infrastructure, which had been in ruins for years. The university, built in the middle of the Gandak river from three sides, has now taken the form of the most beautiful university of Bihar.

During a special conversation with NewsNCR, Dr. Srivastava says that at the time when I joined here, only 455 students were taking education in different streams of agriculture. Now this number has exceeded 1600.

He says, research was going on here on traditional crops for years, first we made changes in it. Most people from Bihar go to other states for jobs, keeping this in mind, many schemes were launched. In this, training was given to the migrant laborers to grow mushrooms in their homes or in the hut itself. This has brought a big change in his life.

There are many schemes of the government on fisheries too. The geographical condition of the area is also such, in which water affects the people and crops here for many months. In such a situation, Matsya Bandhu has started the program and has made them entrepreneurs by training them in fish farming business.

The campus was affected by Corona

Dr Srivastava said that Corona had an impact on us too and our campus was the most affected in the district. But the good thing is that no one died. Now we have got complete control over it. They tell that a great hospital has been built in the campus itself. This is nothing less than a boon for the employees and outsiders of the university.

The Vice Chancellor says that the families living in this part of Bihar got gas cylinders under the Ujjwala scheme started by Prime Minister Narendra Modi, but they were facing a lot of problems in getting them filled. To solve this, we started a scheme, from which every other month people get enough amount to fill a gas cylinder. For this, we take 20 kg of cow dung from them and the villagers make compost from the cow dung and sell it.

Sukhet scheme is changing the lives of farmers

To solve the problem of crop residue, Sukhet scheme has been started from a village in Madhubani district. Under this, thermocol is being prepared from the remains of maize. Millions of tonnes of maize are produced every year in this region. His remains were a big problem for the farmers here.

Herbal Gulal is also being made by contracting with many big companies. Banana and tur residues are being used in handicrafts, which is benefitting thousands of youth.

Litchi kernels are also being processed

The Vice Chancellor says that through the Solar Mount Boat, we started the project for the provision of water in the lands along the banks of the rivers, which benefited the farmers the most. In the coming days, it will be easy to cultivate thousands of hectares of land on the banks of the rivers here. Litchi is an important crop here. Its kernels are also being processed.

He says, it is our effort that through the schemes of the Prime Minister, every village should be connected with the scientists of the university so that the same crops can be cultivated here, which can change the lives of farmers and reduce unemployment. Our efforts are on in the direction of providing direct employment to at least two hundred youths in a Panchayat.

According to Ramesh Chandra Srivastava, for the first time in the field of business education, we have started 9 different courses including Agro Journalism. In this, education will be given from 8th pass to post graduate. The Senior Citizen Helping Certificate course is important, in which mostly 35-year-old women will be educated so that in the coming times, the elderly can also be helped and the unemployed can also get employment.

Also read- People will get pure mustard oil from today, ban on blending implemented, will the price of edible oil increase further?