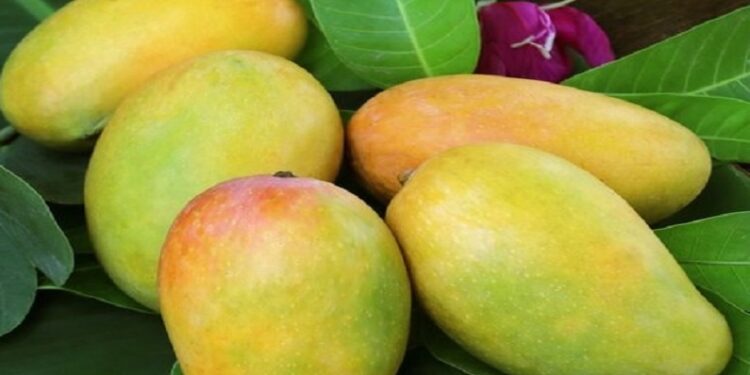 Export of 16 species of mangoes from West Bengal and Bihar to Bahrain has started from today. Out of this, three species (varieties) – Khirsapati and Laxmanbhog (West Bengal) and Jardalu (Bihar) are Geographical Indication (GI) certified.

Saffron – The color of the peels of this mango grown in Gujarat is saffron. That’s why these mangoes are called saffron.

As a big support to the export prospects of mangoes from the eastern region of the country, the export of 16 species of mangoes from West Bengal and Bihar to Bahrain has started from today. Out of this, three species (varieties) – Khirsapati and Laxmanbhog (West Bengal) and Jardalu (Bihar) are Geographical Indication (GI) certified. These fruits have been procured from farmers of Bengal and Bihar by DM Enterprise, a registered exporter from Agriculture and Processed Food Products Export Development Authority (APEDA) under the Ministry of Commerce and Industry and imported by Al Jazeera Group, Bahrain.

APEDA has recently organized a virtual buyer-seller conference in collaboration with the Indian Embassy in Seoul and the Confederation of Indian Industry in Korea, with the aim of increasing mango exports to South Korea. APEDA-APEDA recently organized a mango festival in Berlin, Germany as well.

Export of mangoes of Banganapalli and Subarnarekha species also started

For the first time this season, India has sent a consignment of 2.5 metric tonnes of mangoes of the Geographical Indication (GI) certified Banganapalli and Subarnarekha species procured from farmers of Krishna and Chittoor districts of Andhra Pradesh abroad.

The mangoes exported to South Korea were packaged after being treated, cleaned and dried in an APEDA registered and aided packhouse and vapor heat treatment plant at Tirupati, Andhra Pradesh.

This is the first export made by IK SEZ. IK SEZ is a subordinate unit of Indian Farmers Fertilizer Cooperative Organization (IFFCO) which has 36,000 cooperative societies as its members.

More mangoes are expected to be exported to South Korea this season. IFFCO (IFFCO) Farmers Special Export Zone (IK SEZ) has contracted with South Korea’s Meezyme to supply 66 MT of mangoes this season. is.

Mango is also called ‘King of Fruits’ in rice and in ancient texts it is described as Kalpavriksha (wish fulfilling tree).

There are mango orchards in most of the states of India, out of which Uttar Pradesh, Bihar, Andhra Pradesh, Telangana and Karnataka have a major share in the production of this fruit.

Mangoes are treated and processed in APEDA-registered packhouse facilities and then exported to various regions and countries, including the Middle East (Gulf countries), European Union, USA, Japan and South Korea .