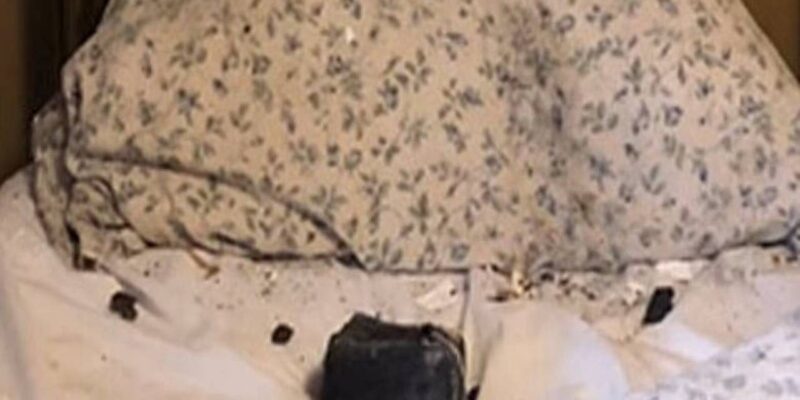 The meteorite fell next to the woman while piercing the roof of the house.

Often the news of meteorites falling from the sky keeps making headlines. Meanwhile, a case has come to light from Canada, about which you will also be surprised to hear about it. Actually a meteorite fell on a woman’s bed when she was sleeping peacefully. The meteorite fell on her bed after tearing the woman’s roof. Well thankfully, the meteorite did not fall on the woman, otherwise this incident could have turned into an accident.

According to a report, this matter is being told of Canada. Where a woman named Ruth Hamilton was sleeping on her bed at night. But during this suddenly he heard the sound of something falling on the bed. Hearing this, she was horrified. When the woman regained consciousness and looked into the room, she saw that a hole was visible in the roof of the house. The woman was shocked to see this sight.

After this, when the woman looked back towards her bed, there was a stone lying there. In fact, the woman did not understand what was the thing that fell in her house. But after a while he understood what this thing was, it was a meteorite. However, fortunately, this meteorite fell at a short distance from the woman, due to which she did not get any kind of injury.

After seeing the meteorite, the woman called the people around. The people who reached the spot also found that the meteorite had fallen next to the woman while making a hole in the roof of the house. By the way, this incident happened on the night of October 4. After this, the local administration was also informed about this incident by calling. The woman herself told that she was horrified. Then he found that a meteorite had fallen on the pillow. Looking up, there was also a hole in the ceiling of the room.

Also read: The bride and groom danced fiercely on the song ‘Sauda Khara-Khara’, watching the video will make your day

Meera Chopra filed an FIR against the interior designer for misbehaving, said- he threw me out of my house

Amidst the power crisis in China, double whammy of floods, devastation in Shanxi, the largest coal producer, at least 15 people died