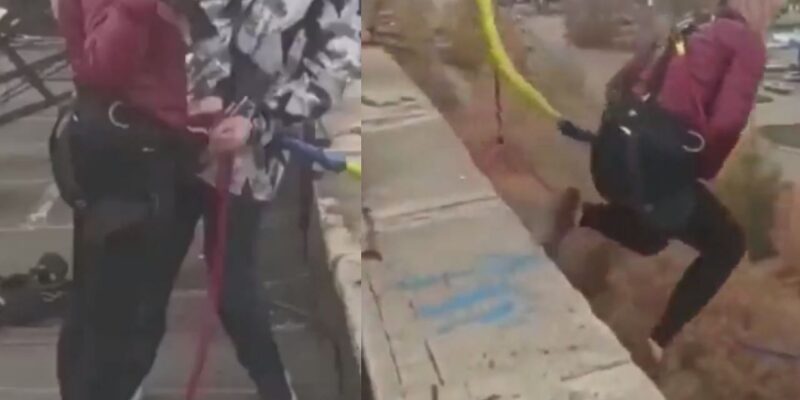 Watching this video will give you goosebumps too

Doing an exciting activity like bungee jumping is not for everyone. But many people fulfill this hobby even by risking their lives. However, sometimes this hobby of his also becomes heavy on him. At present, one such heart-wrenching video is going viral on social media. In which a woman became a victim of a painful accident during bungee jumping. This video is from Kazakhstan. After seeing this, you will also get goosebumps.

According to the report of the website Metro, 33-year-old Yevgenia Leontyeva, a resident of Kazakhstan, went to a hotel in Karaganda city with her husband and friends. Let us tell you that there is a bungee jumping adventure game on the roof of this hotel. Yevgenia, a mother of 3 children, loves this adventure. In the viral video clip, you can see that Yevgenia is standing on a roof at a height of 80 feet. At the same time, before bungee jumping, the staff is checking their harness. After this, Evgenia jumps, but a painful accident happens to her.

🇰🇿 #Kazakhstan Deadly bungee: mother of 3 dies after falling 24 meters with untethered protection rope
Yevgenia Leontyeva, 33, passed away when she jumped from the hotel roof #Karaganda in an extreme sport event. pic.twitter.com/SWlPhE4b4I

Evgenia’s husband had no idea that the bungee jumping he was shooting with his wife’s camera would prove to be the last bungee jumping of his life. There was something wrong with Yevgenia’s harness. Due to which after jumping, instead of hanging in the air, she fell straight to the ground. Then while sliding, it collided with a wall. On seeing this the people standing below ran towards him. Yevgenia was immediately taken to a nearby hospital. Where he died during surgery.

After this painful accident, the police has started the investigation of the case. Police is investigating whether it is just an accident or not a murder. At the same time, a case has also been registered against the organizers of bungee jumping. Police say the weak harness was overlooked. This accident happened due to breaking of one of the two ropes.

Georgieva, who has been accused of benefiting China, gets a big relief, will remain IMF Chief