The situation in Gujarat became uncontrollable, hundreds of villages lost contact – the devastating floods made life difficult for people 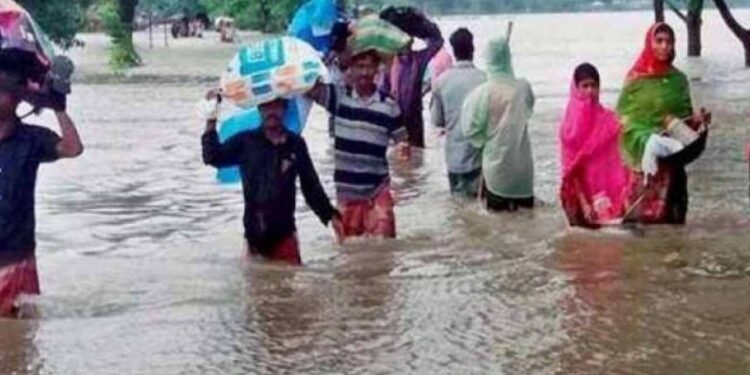 Gujrat flood: Very heavy rain may occur in Jamnagar in the next 24 hours. In such a situation, 6 teams of NDRF and 4 helicopters of Air Force are engaged in rescue operation for relief. Coast guard teams have also been deployed here.

The situation in Gujarat is getting uncontrollable due to floods. symbolic photo.

Today we will also show the growing concern of India due to the wrath of nature. A deep depression has made the whole country miserable. In many states, as the doomsday has come, but Gujarat has been the most affected by it. That’s why today we will show you the situation of ground zero from Gujarat and tell how difficult the life of people has become here and how help is reaching, but first look at the picture of Uttarakhand suffering from deep depression. .

This is the Kempty Falls of Mussoorie in Uttarakhand. It has taken a rough form due to heavy rains. Suddenly the rumbling water came in Kempty Fall, but the administration was also stationed on the spot and all the people were taken out safely from here. However, the situation in Gujarat has become more uncontrollable. Hundreds of villages have lost contact. People are fleeing. Apart from NDRF and Coast Guard, the help of Air Force is also being taken to take people to safe places. In such a situation, the team of TV 9 Bharatvarsh has done a brave reporting on the Gujarat floods from ground zero.

Life is in danger due to rain and floods in Gujarat. Here cities are submerged, villages submerged, houses submerged, markets submerged, roads submerged, highways submerged, rivers in spate. Dams are overflowing. There is a terrible scene of deluge in many districts. In Gujarat, the influx has struck such a blow that people’s breath has been stuck. Helicopters have to be landed for the rescue operation.

In such a situation, NewsNCR decided to show you the direct pictures of the devastating floods in Gujarat from ground zero. Will take you to different areas of Gujarat groaning due to severe floods. Will tell you the situation every step of the way. With these intentions, the team of TV 9 Bharatvarsh reached Ground Zero to bring the picture of the devastation directly to you. We captured every scene in the camera, but started with Jamnagar. Especially from Aaliya village of Jamnagar.

We will show you the picture of the destruction of Alia village due to rain, but first see this picture of rescue in Jamnagar. The situation in Jamnagar has become so serious that people were rescued by helicopters. Apart from NDRF, Air Force teams were also involved in the rescue operation. It is clearly visible in the picture that the Air Force helicopter is air-lifting a person trapped in the flood.

Dozens of people were similarly transported to a safe place in Jamnagar. Along with the helicopter, people were also rescued with the help of boat. Hundreds of people have been rescued by boat from the Ghanchiwad area of ​​Jamnagar so far. The inundation is still visible all around here. Water is flowing from 3 to 6 feet above the roads and streets. There is water in the houses too. Not only the city, but the contact with 35 villages is still cut off. Roads are broken. Bridges have been washed away. One of these is Alia village.

The ordeal of the people of Aliya village is more painful. The people of the village have never seen such floods before. The condition of three districts of Gujarat was worse than the floods, out of which Jamnagar was the most affected. Here houses, houses, roads, highways were submerged in the flood. More than 18 dams overflowed. In such a situation, many highways were closed. Still many areas are completely submerged in water. In many areas, water has reached the first floor of houses. The rescue team has pulled people out of their homes with the help of a rope, but there are many villages where the water has receded but the traces of destruction are left. But, this devastation could be bigger.

Unbridled rain and floods in Gujarat

These pictures of the influx from Gujarat in September will scare you moment by moment. The scariest form of nature’s havoc is captured in these pictures. Unbridled rains and floods in Gujarat have never wreaked so much havoc in recent years. Heavy rains have wreaked havoc in Rajkot too. There is a catastrophe in the whole area. Roads are broken due to heavy rain. Many houses were demolished. People are putting their lives at stake to save their own lives. In many areas, rescue teams are also saving people by playing on their lives.

The flood is flowing below. The sky is raining from above. Even in such a situation, the brave men of the rescue team are walking on a dangerous pillar made of iron, carrying the innocent in their lap. If even one step is taken to the right and left, then both will get absorbed in the strong current of the flood, but on the strength of courage and courage, the rescue team is taking the people to safe places. Entire Rajkot has become a sea. Here everyone was helpless in front of the fast speed of water. Thousands of kilos of vehicles were swept away like straws and people kept watching as spectators. Just look at this white car, the car stuck in the midst of the flood, drifted away from under the bridge in a few seconds and then got caught in the sharp edge.

Another similar picture of the devastation caused by floods has come from another area of ​​Rajkot. Seeing this picture, I cannot believe that there is three to four feet of water on the road of the city and the car is flowing in it. No one is going to see. Nor any rescuers. The water itself is carrying the car away. Imagine this situation is of the important Rajkot city of Gujarat. Even in the rural areas here, the situation is scary. People trapped in homes are being rescued with the help of rope. Now let us show you another picture of Rajkot. Here only the scenes of devastation are visible. Soulab has drowned everything. Floods have wreaked havoc in residential areas as well.

Rajkot Look at this picture, the speed of the water here is so fast that suddenly the Wagon R car started flowing. The people present there tried to stop the car. But the speed is so fast that people started looking helpless. However, the people on the other side did not lose heart. Two or three youths moved fast to stop the drifting car. By then other vehicles also started flowing on the middle road like paper boats. They also have expensive vehicles like BMW. The people around started screaming, but everyone remained useless in front of the speed. One after the other the convoy of vehicles went on the roads. It also showed a heavy truck.

From Rajkot to Junagadh, the tremors of the flood

From Rajkot to Junagadh, the scenes of floods are going to shake the soul. These pictures are from Junagadh. Entire Junagadh seems to be submerged in floods. Roads have become rivers. In this flood, a car fell down from the bridge. The car was pulled out with the help of a crane after several hours of effort. The Bhadar and Ojat rivers of Junagadh are in spate due to heavy rains. All the major dams in the district are overflowing. The movement of people in and around the Dame site has been banned. Due to heavy rains, the highway leading to Porbandar has been flooded up to 4 feet. Due to which the highway had to be closed. All National Highways and State Highways connecting Junagadh, Porbandar and Gir Somnath have been closed. The connectivity of the villages of Junagadh has been lost. .Crops have been ruined. Seeing the situation getting serious due to the floods, the Junagadh administration has ordered the closure of all the school colleges in the district.

The situation has become uncontrollable due to heavy rains in the area of ​​Gir Somnath. The highway was also flooded. Roads became rivers. There has also been heavy damage to standing crops in the fields. There has also been heavy rain in the Gir forests. According to the Meteorological Department, this is a trailer of rain and flood devastation. The Meteorological Department has issued an alert of heavy rain in Gujarat for the next 4-5 days. The first deep depression of this monsoon formed in the Bay of Bengal can inundate Odisha, Delhi, Haryana, western Uttar Pradesh and entire Uttarakhand from tomorrow. In such a situation, like Gujarat, these states also need to be alert.