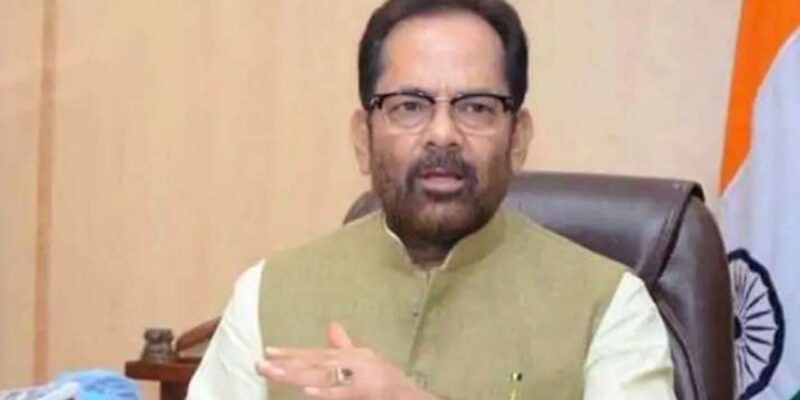 Union Minority Affairs Minister Mukhtar Abbas Naqvi said that the entire Haj process in India will be 100 percent digital in 2022. Mukhtar Abbas Naqvi on Saturday inaugurated the online booking center at Haj House in Mumbai. After which he said in his statement that after Indonesia, the largest number of Haj pilgrims are sent from India. He said that Hajj could not be performed in 2020 and this year due to COVID-19 and the decision taken by the Saudi Arabian government in view of the global pandemic.

Mukhtar Abbas Naqvi said that arrangements have been made for Haj pilgrims in India and Saudi Arabia for Haj 2022 with regard to COVID-19 protocol and health and hygiene. The Union Minister said, “The entire process of Haj 2022 in India will be 100 percent digital.” He told that more than 700 women had applied for Haj in 2021 without Mehram (male companion). Around 2,100 women had applied in the same category in 2020. If they want to go on Haj pilgrimage, then their applications will be valid for 2022 as well. The applications made for Haj 2020 and Haj 2021 of women going on Haj without ‘Mehram’ will be valid for Haj 2022 as well, along with this arrangement has been made for women applying for Haj 2022 without lottery. .

Mukhtar Abbas Naqvi on Saturday discussed preparations for Haj 2022 in a meeting with senior officials of the Haj Committee of India. After this meeting, Naqvi tweeted that now on October 21, in the Haj review meeting in Delhi, various issues related to Haj-2022 will be discussed in detail. He said, “Senior officials of the Ministry of Minority Affairs, Ministry of External Affairs, Health, Civil Aviation, Ambassador of India to Saudi Arabia, Consul General of India in Jeddah and other senior officials will be present in the upcoming Haj review meeting.”

According to the official statement, based on the decision of the Government of Saudi Arabia keeping in mind the Corona epidemic, pilgrims from India could not go for Haj in 2020 and 2021. The announcement of Haj-2022 will be done after discussion with various departments in the review meeting to be held on October 21. The Union Minister said that special training is being arranged for Haj pilgrims going for Haj 2022 in India and Saudi Arabia regarding corona protocol and health and hygiene.

Also read: LAC: 13th round of commander level meeting between India and China continues, focus on these issues including Depsang and Demchok

Income tax return is also filled for the dead, know who files and what are the rules