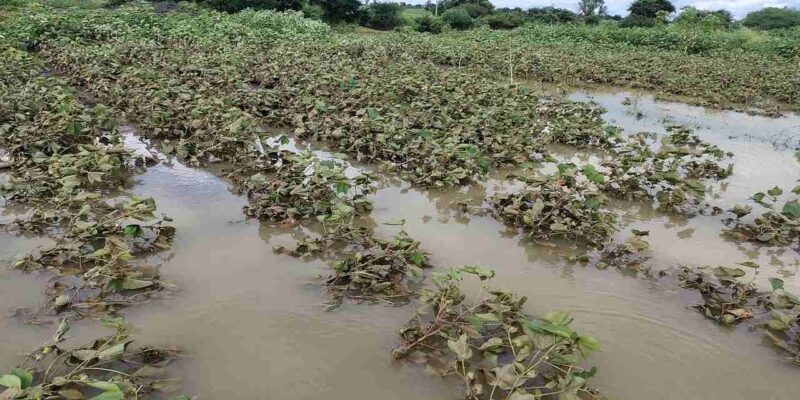 The farmers of Yeola taluka of Nashik, famous for the cultivation of onions, have been hit by excessive rains. Due to the heavy rains in some of its areas last week, crops have been destroyed. Maize crop has got spoiled by drowning in knee-deep water. Therefore, the farmers are demanding immediate compensation after surveying the loss. Apart from maize here, there has been heavy damage to the crops of onion, groundnut and soybean.

Maize was planted by Vijay Jejurkar of Yewala, while Ramnath Deshmukh planted onions in three acres. It cost him around 60,000 to 70,000 rupees. Due to heavy rains, water had accumulated in the onion fields. Due to which the crop was ruined. The farmers are demanding that the government should do a comprehensive survey and compensate them. Otherwise, how will he do further farming?

Meanwhile, a team of talathis, gram sevaks and agriculture officials have been asked to survey and take stock of the damage caused by heavy rains in the taluka. The report will be sent to the collector after making a panchnama of the loss of each farmer. Tehsildar Pramod Hili has assured that the farmers will be given immediate help from the government.

how much damage in nashik

The rains in Nashik in September have caused a lot of damage to the farmers. Due to this, the crop on 54 thousand 877 hectares in the district has been destroyed. The rain has done so much damage that no one has noticed. Preliminary Panchnama of the district revealed that 7,000 chickens have died and 104 houses have collapsed in the district. The devastating rains have affected 69,269 farmers in 152 villages. The rains have badly damaged orchards, maize, millet, soybean and groundnut crops.

what happened to the onion crop

Onion crop has been ruined due to two days of rain in Nandgaon-Malegaon. Onion nursery has also suffered extensively. Grapes and pomegranate orchards have been destroyed. Many houses have been blown away by the wind. Many houses have collapsed. The farmers have therefore started pressurizing the administration to provide immediate help to the farmers by surveying them.

Farmers told that Nandgaon taluka of Nashik district is known for drought. After a long time it has rained so much here. 121 mm of rain was recorded in 12 hours. The rain has taken away the happiness of the farmers. Their hard work has backfired. Where will the money come from to invest in the next crop, this is the big question before the farmers.

read this also: Maharashtra government against GM soymeal import, said – Center should change the decision in the interest of farmers

read this also: Announcement of sugarcane farmer of Maharashtra … if this happens, I will give my one acre of land as a gift