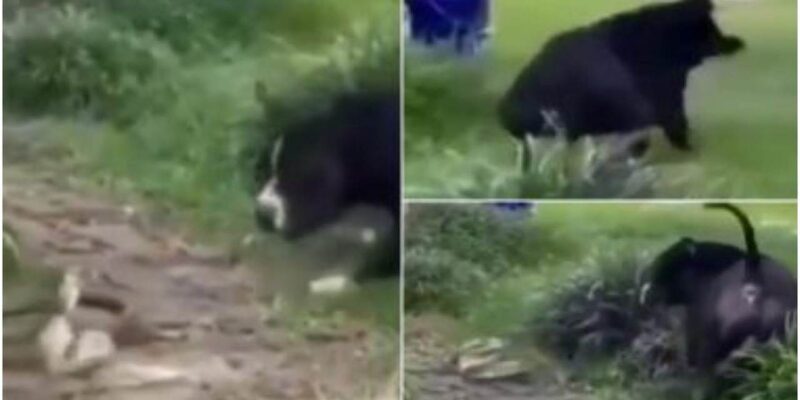 The dog made the snake eat all four

There is a saying that a dog does not fail to show loyalty to his master even by putting his life on the line. Perhaps this is the reason why he is counted among the most loyal and intelligent creatures in the world. A video exposing an example of dog loyalty is doing the rounds on social media these days, which everyone is surprised to see.

In the viral video, you can see that while walking outside the house, a dog encounters a giant snake. But whatever happens after that, you will be stunned even for a moment by seeing it. As soon as the snake tries to enter the house, the dog attacks it. During this, the dog stands in front of the snake and does not allow it to enter inside. The dog makes every blow of the snake useless.

In the video you can see that the snake first tries to attack the dog by jumping in the air. But the dog is also very smart. He very intelligently saves himself from her every attack. In this fight, the process of check and beat goes on for a long time, but only then the dog grabs the snake’s hood with its jaw after getting the chance. After which the snake fails to come out of its jaw even after all the efforts. In this fight, the dog leaves the snake only after taking its life.

This shocking video has been shared on the YouTube channel named World of Wildlife and Village. Till the time of writing the news, it has been viewed more than 11 thousand times.

Also read: 3 feet and 4 inches tall man made a world record in body building, people said that he will not be able to do anything in life

Also read: The person was showing dangerous stunts with a bike, then something like this happened, people said – next time he will think a hundred times before doing stunts

Mukesh Ambani’s Reliance New Energy Solar bought this company, a deal done for so many billions