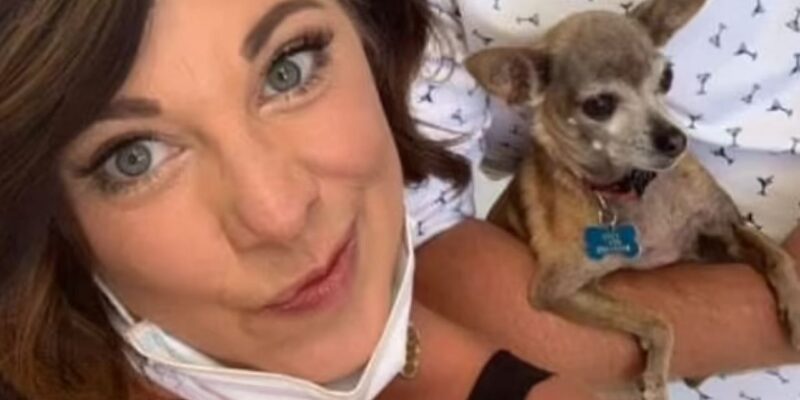 Christie with her pet Chihuahua

Dogs are known for their loyalty. They do not even hesitate to put their lives on the line to avert every calamity that has come upon the owner. However, sometimes they also land the owners in trouble. Something similar happened with a couple from Texas. This couple had left for a holiday, leaving the pet Chihuahua. But whatever happened at the luggage counter in the airport left the couple shocked. Actually, the dog sat hiding in the bag and the couple did not even notice it.

According to the report of the website Daily Mail, Jared and Kristi Owens had left the airport to go from Texas to Las Vegas. But when he reached the counter to give his luggage before the security check-in, his bag turned out to be heavier than the fixed weight. The couple was quite surprised at this. Because Jard and Christie packed their bags following the travel guideline. Both were wondering how the bag became heavy.

Jard and Christie’s eyes were torn when their bag was opened. Airport staff found a small dog inside the couple’s suitcase, which was the couple’s pet Chihuahua. Jard and Christie were shocked to find that their pet Chihuahua sneaked into their bag and sat down. The couple said that they had left it on the trust of their neighbor and went out for a holiday. But he did not realize that his pet was hiding in the bag.

However, this act of the dog put the couple in trouble. The police started questioning him about the smuggling of animals at the airport. But Jard and Christie assure them that they had no idea that their pet dog was hiding inside the suitcase. Christie told that it was good that in Texas itself, she came to know of her pet dog hiding in the bag, otherwise her life could have been lost.

Also read: The woman was doing bungee jumping, when she was the victim of a painful accident; Shocking video surfaced