The blood of this crab is sold for Rs 11 lakh a liter, it works in making vaccine 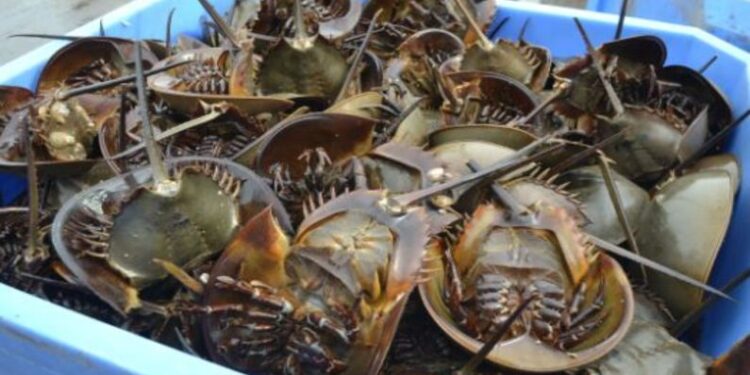 Horseshoe crab: Scientists used to inject many rabbits and wait for the symptoms to test the vaccine. These symptoms started appearing in rabbits in no time. But in 1970 the use of LAL was approved.

The name of this crab is Horseshoe Crab i.e. horseshoe crab.

If someone asks you the names of some expensive things, you will immediately tell the names of diamonds and jewels. But hardly any crab will come to your mind. Crab and its blood may hardly seem like a very expensive thing to you. But this is true. It is also a fact and it has a strong scientific basis. Horseshoe crab blood is one of the most expensive things in the world. The reason for this is special. This blood is used in the medical field. There are many characteristics of this blood which make it costlier than diamonds and jewels.

The name of this crab is Horseshoe Crab i.e. horseshoe crab. Its shape is like a horseshoe. That’s why it got the name of Horseshoe Crab. You must be thinking that if the blood is of some animal, it would be red. If you think so then you are wrong. The blood of this crab is blue in colour. This blue color makes it special. There is an adulteration of bacteria in anything, if it is to be detected, then a small amount of crab blood catches this adulteration immediately. This is the reason that the blood of Horseshoe Crab is the most used in the medical field.

The demand for this blood is so high that a gallon (approximately 4 litres) costs $60,000 or 44 lakhs. l liter will cost around Rs 11 lakh. Now the question is, why is the blood of this crab so expensive? Who buys blue blood of crab at such a high price? Copper is found in very high amounts in the blood, hence its color is dark blue. However, copper is not the biggest feature of this blood.

It contains a very specific adulterant detecting chemical called limulus amebacite lysate or LAL. Until LAL was detected, scientists had trouble detecting bacterial contamination in a vaccine or medical tool. For example, if there is an adulteration of E. coli or Salmonella, then it was very difficult to catch it.

where is it used

Scientists used to inject several rabbits to test the vaccine and waited for the symptoms. These symptoms started appearing in rabbits in no time. But in 1970 the use of LAL was approved. After this a lot changed in the medical world. A few drops of LAL, extracted from the blood of horseshoes, are put on a medical device or vaccine. Within seconds after ingestion, LAL captures any gram-negative bacteria in a jelly cocoon. LAL kills the bacteria and the jelly cocoon surrounds the dead bacteria. The potential danger in the vaccine or medical tool from LAL is known in advance, which can later lead to death.

LAL is removed from the blood

Through this process, LAL prevents infection which can be fatal. Horseshoe crabs are caught in large quantities so that LAL can be extracted in large quantities. In the marine areas of the world, boats and ships associated with the medical industry catch horseshoe crab day and night. The medical industry catches about 600,000 horseshoe crabs every year. Blood is drawn from 30 percent of these crabs. 30% of crabs are such that do not pass this test and die during blood removal. The crabs that survive are again released into the sea. It is not known later how quickly those crabs recover after going to sea, or whether they are able to recover.

In view of the usefulness of these crabs, the International Union for the Conservation of Nature has put the American Horseshoe Crab in the threatened category or Red List. It is believed that the number of these crabs in America is continuously decreasing and in the next 40 years its population will decrease by 30 percent. Companies that work on LAL believe that crabs recover after being released into the sea. But some new studies show that not all crabs are lucky. Scientists say that up to 10-25 percent of crabs die in a few days after being released into the sea. These crabs remain weak for a few months. If these crabs remain healthy for two weeks, then they return to their old life again.

what will happen next

In view of the adverse effects on crabs, scientists are looking for a synthetic alternative to LAL. Until a new alternative is found, only the LAL extracted from the crab will work. At present, the US organization FDA has considered LAL to be the most effective for the testing of bacteria. The demand for LAL has increased in view of the production of vaccines etc. Crabs are not growing accordingly. In view of this, it may decrease in future. Later, the horseshoe crab may become deficient in blood. In such a situation, our life and that of the rabbits will be in danger.