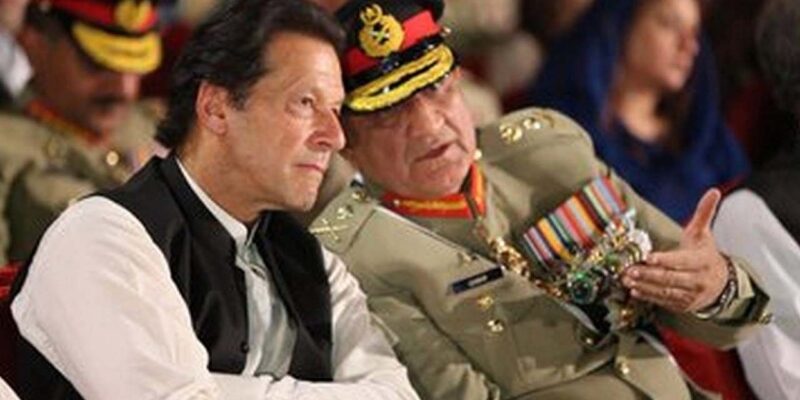 Just 8 days before today, a ruckus broke out in Pakistan. On 6 October, the ISPR i.e. Inter Services Public Relations, which works for the publicity and communication of Pakistan’s army, issued a statement announcing some transfers in the army. This announcement was special, because it also included the announcement of the name of the new DG i.e. Director General of Pakistan’s spy agency ISI. The statement of ISPR said that till now LT, who is handling the responsibility of ISI DG. GEN. Faiz Hameed has been transferred and made the commander of Peshawar Corps and LT to take over the responsibility of DG ISI. GEN. Nadeem Anjum has been selected.

Usually, such announcements of the Pakistan Army are not disputed, because the decision of the army is considered final on every issue, but this time it did not happen. That is the root of all controversy. The Pakistan Army is free to take all decisions in its department, promotion and transfer decisions too, but the appointment of DG ISI is announced from the office of the Prime Minister of Pakistan and the reinstatement of DG ISI is done by the Prime Minister after consulting the Pakistan Army Chief. . Obviously this has not happened in this case.

So LT. GEN. The name of Nadeem Anjum was announced but, the notification about this was not issued by the Pakistan PMO. In addition, LT. GEN. Even after the announcement of the name of the new DG ISI, Faiz Hameed participated in the meeting of the National Security Committee on the very next day as DG ISI. Now the market of rumors was about to heat up. The matter became so serious that Prime Minister Imran Khan, who was scheduled to inaugurate the Pakistan Pavilion at the Dubai EXPO 2020 on 9 October, postponed his visit to Dubai. In newspapers, on news channels and on social media, it was common to discuss that Imran Khan and Pakistan’s Army Chief General Qamar Javed Bajwa could not form an opinion on the name of DG ISI.

It is believed that LT. GEN. Nadeem Anjum is close to General Bajwa while LT. GEN. Faiz Hameed has the confidence of Imran Khan. When the rumor market got heated that there was a tussle between the PM and the Army Chief, then understanding the seriousness of the news, both the government and the army got involved in damage control. On Monday 11 October, there was a long meeting between the Army Chief and the Prime Minister. At the cabinet meeting the next day, Imran Khan assured the ministers that all was well in the government and that “aapne nahin nahi hai,” as he often says. Pakistan’s Information Minister Fawad Chaudhry assured the people that neither Wazire Azam will take any such step that will tarnish the image of the army, nor will General Bajwa do anything that will harm the government. But, amidst all these comforts, the LT. GEN. The notification of Nadeem Anjum becoming the new DG ISI has not yet been issued by Pakistan PMO. That is, the debate on the name of DG ISI is still going on.

It is worth noting that the tenure of Army Chief General Bajwa is ending next year, and he has already got an extension. Ayesha Siddiqa, an analyst on military and political affairs in Pakistan, says that LT. GEN. Faiz Hameed can be among those 4 generals whose name will be in the list of candidates for the next Army Chief. GEN. Hameed may feel that his closeness to the PM can make him the next warlord. It is possible that General Bajwa is GEN than him. Please forward Anjum’s name. Meaning this effort is being made not only for the responsibility of DG ISI, but for the post of the next Army Chief.

DG ISI is a task of great responsibility in the military personnel of Pakistan. The officer handling it not only does the work of intelligence inside and outside Pakistan, he also works to support or bring down the politicians of the army’s likes and dislikes. ISI is that department which protects the interests of the army in Pakistan’s politics.

It is also worth noting that whenever the civilian governments of Pakistan made DG ISI of their own free will, they have not been able to last long. At the time of Benazir Bhutto LT. GEN. Shamsur Rahman became DG ISI in May 1989 but was shown the way out within 15 months.

In October 1998 LT. GEN. Khwaja Ziauddin Abbasi was made DG of ISI by Mohammad Nawaz Sharif but a year later, his term also ended with General Pervez Musharraf’s grab of power. GEN. The worse thing happened with Abbasi was that GEN. Musharraf set up an investigation against him, because after the defeat in the Kargil war, GEN. Nawaz Sharif has GEN by dismissing Musharraf. Abbasi was made the new army chief.

Now it remains to be seen whether Imran Khan and General Bajwa can agree on a name for the responsibility of DG ISI, or whether the distance between the army and the civilian government will widen.

Also read- Rising inflation should not spoil the sweetness of growth, more prices may be seen in December

Also read: If you earn more than your husband, are more successful then you are more likely to be subjected to domestic violence: Study

News of relief for Modi government, World Bank said this on Indian economy

Defense Minister Rajnath Singh will start the work of the last phase of Sela Tunnel today, the distance from Tawang to China border will be reduced by 10 km