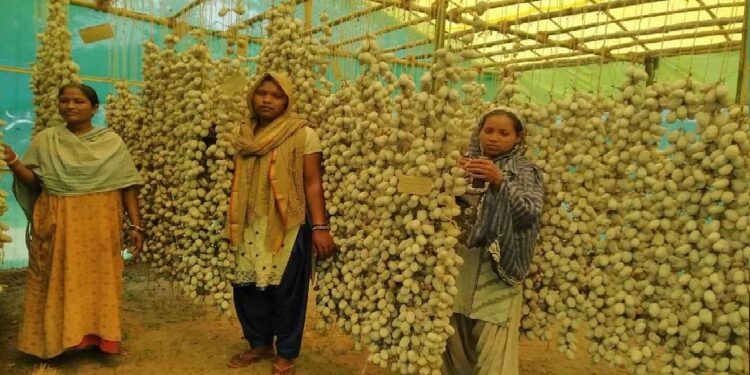 Pinky Hessa, a resident of Kumardungi in West Singhbhum district, tells that she leaves silkworms in 20 to 25 trees, since 2018, she has started cultivation of tasar, it takes less effort, according to her the profit is more.

Rural women do not become self-sufficient by tasar production

The land and weather of Jharkhand is such that almost everything can be cultivated here. There is also a dense forest, which also benefits the farmers of the state, they cultivate lac and tasar. Many women in West Singhbhum district are earning good money by joining this farming and becoming self-reliant. These are all rural women who were first linked with women’s self-help groups and then trained for its cultivation. Since then the woman is doing Tasar cultivation and earning five to thousand rupees every month. This has brought a big change in his life.

Mahila Kisan Sashaktikaran Yojana has been started in Jharkhand by Jharkhand State Lilihood Mission to help rural women in farming and make them self-reliant. It is running in 21 blocks of Jharkhand. So far 17496 farmers have joined it. In this way, tasar production is getting a boost in Jharkhand.

work under the project

In this project, three types of silk are cultivated, under this, there are separate farmers to prepare basic seeds, who look after only basic seed production. DFL (disease free eggs) are prepared from that seed. There are three types of farmers who are given different jobs.

Pinky Hessa, a resident of Kumardungi in West Singhbhum district, tells that she leaves silkworms in 20 to 25 trees, since 2018, she has started cultivation of tasar, it takes less effort, according to her the profit is more. He told that this year he has earned 17 thousand rupees. The DFLs for Kucoon are met by JSLPS.

Sarita Purti, a resident of Tantnagar block of West Singhbhum, has been cultivating tasar since the last two years. He told that when he got information about its cultivation, since then he had made up his mind to do its cultivation. Regarding the method of farming, he told that first of all, bring the egg and keep it in the paper. After that, when the insect emerges from it, they leave it in the tree. Before leaving it in the tree, clean the bottom of the tree thoroughly. Then sprinkle lime under the tree and tree. He told that at the end of July he had left the insect in the tree, in the first week of September, the kukun was ready. He told that it took him 1400 rupees to buy DFL. But he earned five thousand rupees from him. More people cultivate it in their village.

Read also: Estimates of record yield due to good rains, production of kharif crops may be 150 million tonnes