Target Killing: 16 incidents of target killing this year, Kashmiri Pandit said – shift us or else we will go away 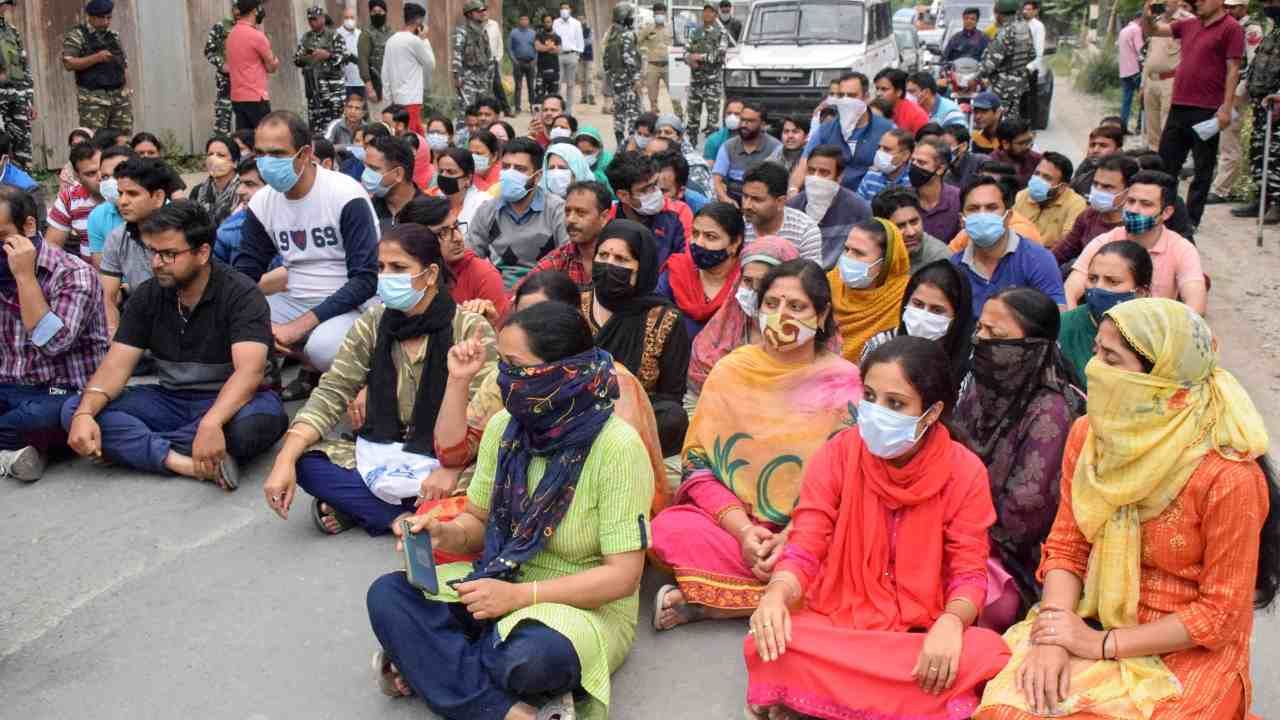 In May, the incidents of target killing increased in the Kashmir Valley and people were killed by target killing for the 7th time. This is the second killing of a non-Muslim government employee in the month of May and the seventh incident of targeted killing in Kashmir.

Union Territory of Jammu and Kashmir (Jammu-KashmirThe process of killings of non-Muslim people, especially people of Hindu society, is not taking its name to stop. From January this year till now i.e. in the last 5 months, at least 16 people including police officers, teachers and sarpanches have been targeted in the Kashmir Valley.Target Killing) has been killed. Kashmiri Pandits are protesting against the continuous killings and they say that the government should shift us somewhere outside the valley or else we will migrate.

A Hindu teacher was shot dead by terrorists in Kulgam district of Jammu and Kashmir on Tuesday. Police told about the incident that terrorists opened fire on Rajni Bala (36) at Gopalpura in Kulgam district, injuring her seriously. He was immediately taken to the hospital, where doctors declared him brought dead. Rajni Bala, a resident of Samba district, was posted as a teacher in a government school in Gopalpura. Rajni Bala was a migrant Kashmiri Pandit.

Seventh incident of target killing in May

In May, the incidents of target killing increased in the Kashmir Valley and people were killed by target killing for the 7th time. This is the second killing of a non-Muslim government employee in the month of May and the seventh incident of targeted killing in Kashmir.

TV artist was murdered in the past

On May 25, the very next day after this incident, TV artist Amrin Bhat was murdered in Budgam. And then on May 31, Rajni Bala was also murdered. From January to May, terrorists have killed a total of 18 civilians, while 15 security forces personnel have been martyred. This year, non-Muslims were targeted for the 13th time in the Valley. After the murder of Rajni Bala, the employees demonstrated at different places and their organization has given a 24-hour ultimatum to the government that they will do mass exodus if they are not sent out of Kashmir.

Employees of the Kashmiri Pandit community, posted under the Prime Minister’s package after the murder of teacher Rajni, said they would be forced to flee the Valley on a large scale if they were not sent to safer places within the next 24 hours. An official said that a search has been started for the attackers by cordoning off the area.

The incident of the woman’s murder is being widely condemned at the political level in the Valley. Meanwhile, Kashmiri Pandit employees have spoken of exodus and protested at many places expressing anger over the teacher’s murder case. “We have decided that if the government does not take any concrete steps for our (security) within 24 hours, then once again there will be a mass exodus,” said a protester.

He said the targeted killings of Kashmiri Pandits continued and the community was tired of pleading with the government. National Conference Vice President Omar Abdullah tweeted, “Very sad.. This is yet another targeted killing in a long list of recent attacks on unarmed civilians. The words of condemnation and condolence and the assurance of the government that they will not rest till the situation returns to normal… all seem hollow. May Rajni’s soul rest in peace.”

Regarding the targeted killings, Jammu and Kashmir Police DGP Dilbag Singh said that those targeting minorities, civilians and government people are “only propagating fear, as local residents have stopped responding to their orders”. “

On the escalating incidents, Jammu and Kashmir Police DGP Dilbag Singh told the English newspaper The Indian Express that those targeting minorities, civilians and people in the government “are only propagating fear, as local residents respond to their orders”. has stopped.” He also said that by attacking several parts of the Valley and members of different sections of society, “terrorists want to show their presence.” DGP Dilbag Singh said that by attacking those whose “rights to live in Kashmir are questioned by terrorists, they are also creating an environment for Kashmiri people to attack outside Jammu and Kashmir”.

Cases of target killings in the Valley intensified after February 2021, when the son of the owner of Krishna Dhaba in Srinagar was shot dead inside his restaurant. He died in the hospital two days later after being shot. Then after this on 5 October 2021, chemist ML Bindu was murdered in his shop, there was a lot of outrage among the people against this murder.

Two days after the incident, Supinder Kaur, principal of Government Boys Higher Secondary School, Sangam, and school teacher Deepak Chand were shot by the assailants after checking the identity cards of the school staff. Last year, 182 terrorists and at least 35 civilians were killed in the Valley.


Members of Panchayati Raj institutions, including three sarpanches, have been shot dead since the beginning of this year. On 4 April, Bal Krishna, who came from the Kashmiri Pandit community, was murdered by suspected terrorists near his house in Chautigam Shopian. In at least three cases, laborers from outside Jammu and Kashmir were also shot and injured.