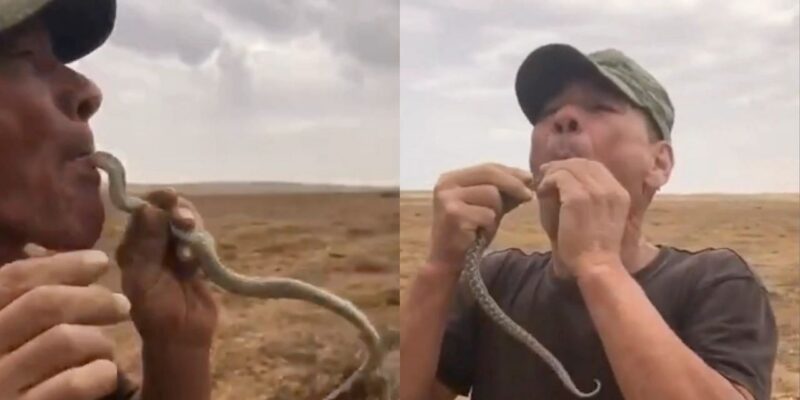 Stunt with snake had to be expensive

In Russia, a man swallowed a live snake. However, this person had to pay the price for this act by losing his life. A video of this is also going viral.

On social media, you must have often read and heard about those who play with poisonous and big snakes. But have you ever heard that a person swallowed a snake alive? This may sound a bit strange, but it is true. However, his own ludicrous stunt was overshadowed by this man and he had to pay the price by losing his life. The issue is of Russia.

According to the report of the website The Sun, this shocking case is of Astrakhan of Russia. A video of this is also going viral. In which a 55-year-old agricultural laborer is seen swallowing a live snake. This person tried unsuccessfully twice to swallow the snake first. But as soon as he made the third attempt, the snake bit his tongue. Even after this, when the person did not stop, the snake again bit him on the throat.

According to the report, a few hours after this ludicrous stunt, the condition of the worker started deteriorating. After which he was immediately taken to the hospital. Doctors told that he was allergic to snake bite. The laborer’s throat and tongue were swollen due to snakebite.

According to doctors, the laborer had anaphylactic shock after the snake bite. Because of this, his tongue became so swollen that it was becoming difficult even to take it inside the mouth. Due to this the person started having trouble breathing and he died a few hours later.

According to local media reports, there is a practice of swallowing live snakes in this area of ​​Russia. Let us tell you that here snake of step viper species is found in watermelon fields. This snake is not very poisonous. After the death of the laborer, the local administration has appealed to the people not to do anything that would prove fatal for them.

Also read: Sheikh’s phone network collapsed as soon as he took off, fiercely created a ruckus, said – get the plane landed