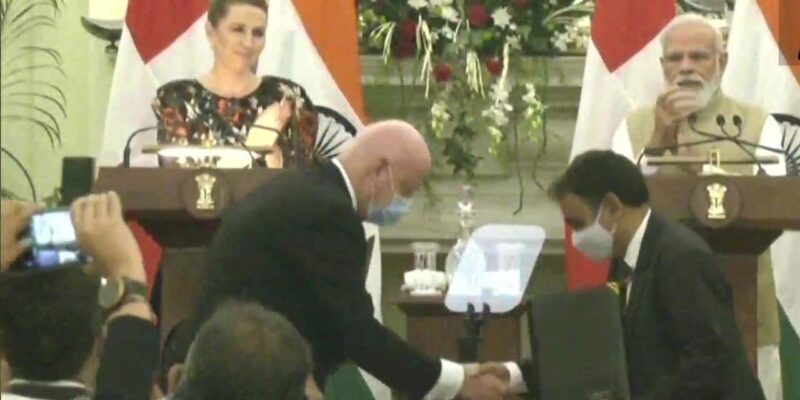 Bilateral talks between PM Modi and Prime Minister of Denmark

A joint statement was issued after bilateral talks between the Prime Ministers of the two countries. After the bilateral meeting with the Prime Minister of Denmark, Prime Minister Narendra Modi said that even though our meeting today was the first face-to-face meeting, the contact and cooperation between India and Denmark remained intact even during the Corona period. PM Modi said, “It is a matter of happiness that Denmark has become a member of the International Solar Alliance. This is a new dimension in the India-Denmark partnership.”

Prime Minister Narendra Modi said, “India and Denmark have continued their cooperation during the COVID19 pandemic. During the virtual summit, we had decided to establish a Green Strategic Partnership between the two countries. Today we reviewed and reiterated our commitment to this. This is a symbol of the far-reaching thinking of both our countries and respect for the environment.

PM Modi said that today we have also decided that we will continue to expand the scope of our cooperation continuously. We have started a new partnership in the field of health. We have also decided to cooperate in agriculture related technology to increase agricultural production and income of farmers in India. The Prime Minister said, “Denmark’s expertise and technology can play a very important role in the scale and speed with which we want to move forward. The reforms in India’s economy, especially the steps taken in the manufacturing sector, present immense opportunities for such companies.

Both countries agree to work on water and green fuel

On the other hand, Danish Prime Minister Mette Fredriksson said that today we have agreed to work on water and green fuel. We have also agreed to work together in areas like health and agriculture. Our green cooperation is very ambitious. The Danish Prime Minister said, “We are two democratic countries that believe in an international order based on rules. The collaboration between India and Denmark is a great example of how green growth and green transition can go hand in hand.”

People of these 5 zodiac signs do not hesitate to break their relationship, know about them…