Shocking: The woman is stunned by a 5-feet predatory lizard, the public is surprised to see the video 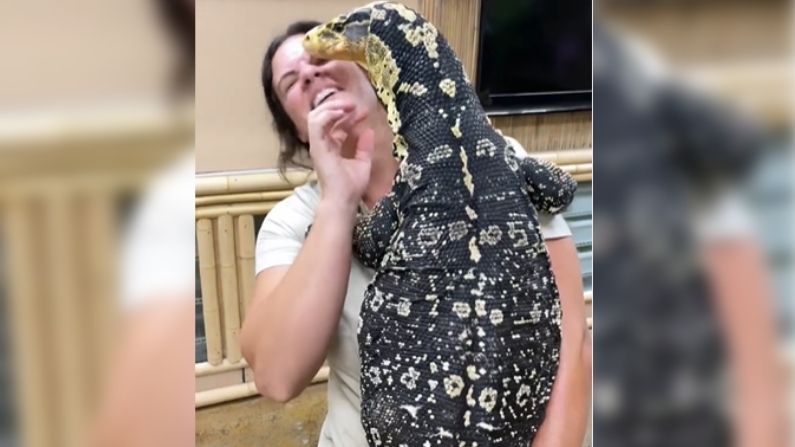 Those who are sweating after watching this video say that this lizard can attack your neck in a second and uproot the flesh. But many people are also happy to see the love between the woman and the lizard.

There are many people who love animals in this world. You must have often seen people hugging their pet dog, cat or birds. But has anyone ever seen a 5 feet long predatory lizard attached to his chest. Don’t be too shocked to read this, because there is a woman who has a wonderful friendship with Monitor Lizard and this Monitor Lizard clings to her as if the woman is her mother.

There is a great love between this woman and the hunter lizard and how strong their bond is, a video related to it has also surfaced. People’s eyes are getting torn after watching this video and they have been forced to think that how can someone keep such a big and dangerous lizard by their chest. The video has been uploaded to Instagram by The Reptile Zoo. Whose caption reads, ‘We are in love with this teddy bear (monitor lizard).’

In this shocking video, the woman working in the zoo has lovingly carried a lizard in her lap like a child. At the same time, the lizard is also licking the woman’s face like a pet and is in her lap with pleasure. In the video, a trend professional woman is seen saying. ‘This (monitor lizard) is our sweetheart, it never bothers us.’

While watching this video of him, those who are sweating say that this lizard can attack your neck in a second and uproot the flesh. But many people are also happy to see the love between the woman and the lizard. One user commented and wrote that how much does this lizard flirt. Another user said that it is very cute. Another user wrote in the comment that I can see the happiness in the eyes of the lizard, how happy he is with this woman.

Also read: Leopard ambushed a tree, attacked the deer like this, your hair will stand after watching the video