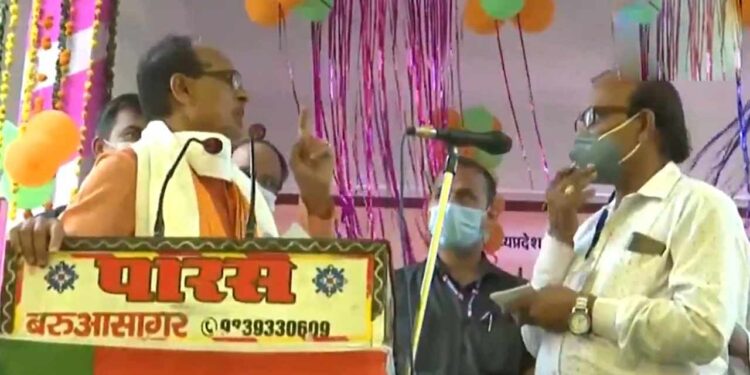 CM Shivraj Singh Chouhan also ordered a probe by the Economic Offenses Wing of the police against both the officers. He told the crowd that his government will ensure that those involved in corruption are sent to jail.

Chouhan asked the people the names of the officials involved in corruption in the Pradhan Mantri Awas Yojana for the poor in a meeting organized in Jairom and then repeated the names mentioned by the crowd. The Chief Minister told the people, “They (officers) were telling me that some Umashankar was the CMO (Chief Municipal Officer) and one Abhishek Raut is the deputy engineer.” To this the people replied “yes”. So the Chief Minister announced the suspension of Umashankar and Raut from the stage itself.

#WATCH | Madhya Pradesh CM Shivraj Singh Chouhan reprimands state officials during a public event in Niwari over irregularities in PM Awas Yojana, in Jeron. He says, “The then CMO is being suspended with immediate effect. The probe will be done by EOW & he will be sent to jail.” pic.twitter.com/MLdTd5Qmgh

He also ordered a probe by the Economic Offenses Wing of the police against both the officers. He told the crowd that his government will ensure that those involved in corruption are sent to jail. Officials said that Chouhan announced several projects for Niwari and Tikamgarh in the meeting as part of his Jandarshan Yatra ahead of the Prithvipur assembly by-election.

raised the issue of water problem

In fact, on Sunday, CM Shivraj Singh Chouhan addressed the people in Shivrajpur area of ​​Raigaon assembly of Satna under Jandarshan Yatra. During his speech, people raised the issue of drinking water problem. On this, he took details from the District Collector.