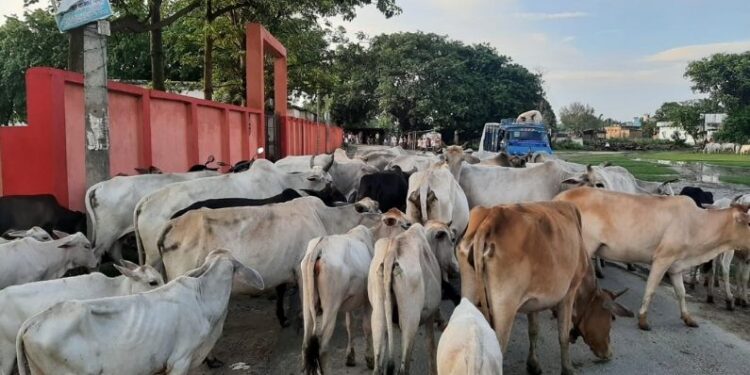 The tradition of grazing cattle is old. Shepherds travel hundreds of mills with their cattle. But with the advent of mobile, their life has become much easier than before.

Cattle herding has been an old tradition. Not only in India but all over the world pastoralists graze their cattle. In Indian mythology, there is a mention of Lord Krishna grazing cows. However, due to the increase in population and the desire for more production, the pastures are gradually getting exhausted. Despite this, there is still a tradition of grazing the people.

Ramsudan, a resident of Jamui district of Bihar, had left for North Bihar with more than a thousand milch cattle from his and nearby villages as soon as Holi ended this year. Ramsudan is a cattle farmer by profession. He has 150 cows and more than 350 buffaloes. When he reached Baidyanathpur, a village in Samastipur district with more than 500 cattle, he told that he had left the house in March itself. At that time there is a shortage of fodder.

Where they stay, they sell milk

Due to being a village on the banks of the river, land is available for fodder for a particular time, so these cattle have to be taken out. Now when we go out with cattle, whatever village comes on the way. remain there. There is only one day’s fodder in a village field. After grazing the cattle, they stop in front of someone’s house in the village and the cattle take rest there for the night. They tell that where we stay, we take out milk and sell it in the village. There is only one quintal of milk in a day.

spend night and day with cattle

A total of 30 people have come out with 1000 cattle. It also has a Hariya. They say that through the Terai of Nepal, they have passed through about a dozen districts including Madhubani, Darbhanga and Samastipur. Went on the same route while leaving. Then the harvest was going on. Now the fields are empty and the cattle have been grazing in it for months. They say that on the way the cattle also give a calf and in a day or two they are able to walk and then walk together. Hariya says that our night and day pass only with cattle.

The age of mobile has made life easier

When Hariya was asked that animals are not afraid at night, in response, he said that there is fear. Sometimes the children of cattle run away with wild animals. But if so many cattle live together then the fear subsides. They say that all cattle recognize us and on giving a sound they stop and start walking.

Shepherds are not of nomadic species

Agricultural scientist Dr. Mrityunjay Kumar says that they are not people of nomadic species, but their family background is such, due to which they keep on carrying animals for months. Also, there is a special thing in these animals that if you keep them tied in the house, then it will not give milk. They have to graze in the forests or fields, only then they give milk. It is very difficult to feed so many cattle at once. They eat many quintals of straw and other fodder in a day. Therefore, their owners keep roaming for months and months with these migratory animals and their business also continues.

It’s a whole business that keeps on moving along the way. Cattle and shepherds reach their homes as soon as July arrives. For the next 6 to 8 months, farmers keep the cattle at home and take them out again in March. Most of the indigenous breed cows and buffaloes live in it, which can travel to hundreds of mills. These animals stay at their original owner’s house for only a few months and as soon as the season comes, the shepherds take them to West Bengal and Odisha.

Also read- Nurseries started if they did not earn in farming, now they produce 8 crore seeds every year, are supplied abroad