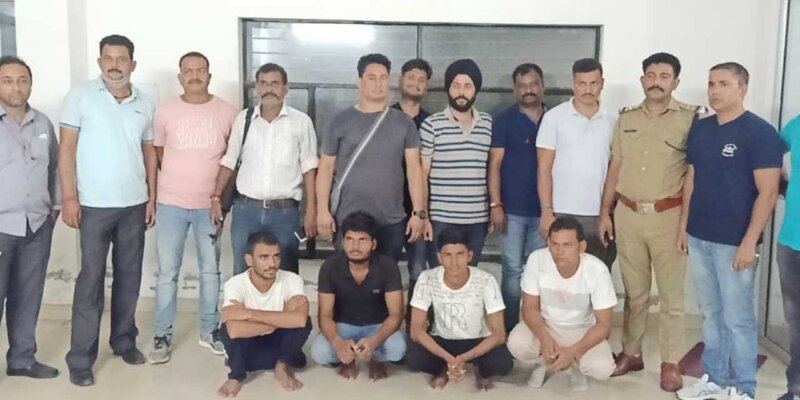 Gangsters arrested in the extortion case from Almora Jail.

This is the first time that a foreign WhatsApp number has been confiscated from the possession of a notorious prisoner in the Almora district jail. In the joint raid of Uttarakhand State Police’s Special Task Force and Almora Police, many more sensational revelations have been made on Tuesday.

The recovery of cash, mobile phones and South African WhatsApp numbers from the possession of gangsters inside the four-walls of the jail has created a ruckus in the Almora jail administration. This is the first time that a foreign WhatsApp number has been confiscated from the possession of a notorious prisoner in the Almora district jail. In the joint raid of Uttarakhand State Police’s Special Task Force and Almora Police, many more sensational revelations have been made on Tuesday. During the raid, the teams have also arrested the gangsters lodged in the jail. Along with this, the blame of providing better facilities for criminals inside the jail than at home has also been dropped on many officers.

After the bustle, four jail-workers including the in-charge jail superintendent have been suspended with immediate effect. Departmental inquiry has been ordered against all of them. The arrested miscreants in this business of illegal extortion going on from inside the jail have themselves confessed that they used to get every banned and convenient item like arms, cash, sim and mobile, inside with the connivance of the jail staff. The surprising thing in all this is that the gangster who has been arrested from inside the jail was using WhatsApp number of South Africa to collect extortion from inside the jail itself.

This prison officer-staff got suspended

The officers and employees of Almora District Jail who have been suspended by the State Inspector General (Prisons) are in-charge Jail Superintendent Sanjeev Kumar Hyanki, Chief Jail Warden Shankar Ram Arya and two Jail Wardens Pradeep Malila and Rahul Rai. The suspension of all these has also been confirmed by the Directorate General of Uttarakhand State Police late on Tuesday night. All these have been suspended on the basis of the report received from the State Police Special Task Force. It is noteworthy that the joint teams of the STF of the state police and the local police of Almora had raided the Almora district jail on Monday evening.

During the raid, the information given by the notorious crook Kaleem Ahmed, arrested from inside the jail, to the STF, it was decided that the gangster lodged inside the jail without the connivance of the jail staff did not run such a huge extortion ‘syndicate’. can. Ajay Singh, Senior Superintendent of Police of Uttarakhand Special Task Force also confirmed all these facts on Tuesday. According to SSP STF, “Rs 1 lakh 29 thousand cash, four SIM mobile phones and a large number of drugs have been recovered from the possession of gangster Kalim Ahmed, arrested from inside the jail. Based on the interrogation of Kalim, the STF has also arrested four of his shooters from Haridwar.

Searching for prey from inside the jail

According to Ajay Singh, a jail worker was arrested during the raid on charges of collusion with criminals. 3 pistols, 6 cartridges, 15 thousand rupees and four mobile phones being used in extortion have also been recovered from the possession of gangster Kalim Ahmed arrested from Haridwar. The names of the shooters of Kalim gang arrested by STF from Haridwar are Akshay Kumar, Saheb Kumar, Saddam alias Gullu and Nadeem. While raids are being conducted in search of his fellow shooters Pappu alias Langra and Sayyaz alias Chaman Mama. It has been decided that only Kalim Ahmed, sitting in Almora jail, used to look for prey for his miscreants present outside. For this he used WhatsApp number of South Africa.

So that the Uttarakhand State Police or any other agency cannot easily reach him in jail. It was through WhatsApp calls made from jail that the Kalim crook used to send photos or videos of the victim (which would have extorted money) to his henchmen outside so that there would be no mistake in identification. Kaleem is such a clever mind that in order to avoid the police, he used to contract the miscreants from outside Uttarakhand to get his victim halal. So that the outside crooks do their work in Uttarakhand and get away cleanly and the local police do not even feel the wind.

KBC 13: Amitabh Bachchan used to be happy to see his name in the newspaper, revealed in the show