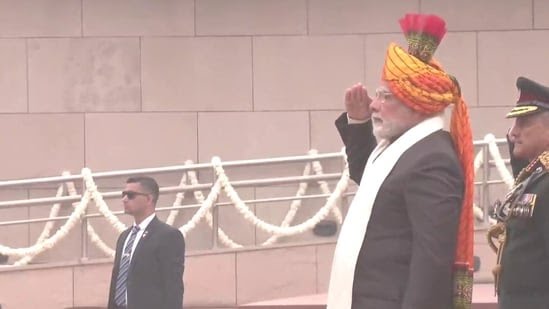 India is celebrating 74th Republic Day today on 26 January. Kartavyapath parade will start in a while. Earlier, Prime Minister Narendra Modi reached the War Memorial and paid tribute to the martyrs. During this, Defense Minister Rajnath Singh, CDS Anil Chauhan and the chiefs of the three armies were present with him. For the first time, there will be a parade on the Kartavyapath on the occasion of Republic Day. Earlier this place was known as Rajpath. A glimpse of ‘New India’ will be seen in this parade.

Along with this, there will be a display of indigenous military might and women power. Cultural diversity will be seen in the tableaux of the states. Along with this, 50 aircraft of the Air Force will show their might.

President Draupadi Murmu will lead the nation from the path of duty. This time on Republic Day, Egyptian President Abdel Fattah El-Sisi will be the chief guest.

Prime Minister Narendra Modi has reached the War Memorial. Defense Minister Rajnath Singh is also present with him. Here he will pay tribute to the martyrs of the country. After this, they will go to duty from here. Where the parade will start from 10.30 am.

Special arrangements made to watch the parade

If someone has the spirit of hard work and passion in his heart, then any…

According to the reports, Kiara and Sid Apni organized lunch on 6 February i.e. today.…