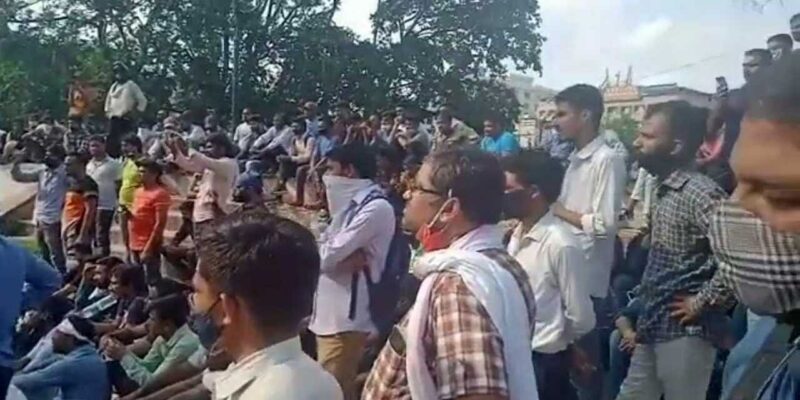 Youth gathered to make the outline of the movement in Jaipur.

After 5 big exams SI Recruitment Exam, NEET-2021, JEN Recruitment Exam-2021, Librarian Grade-3 Exam in Rajasthan in a year, now the biggest exam REET paper is out.REET Paper Leak). This matter is gaining momentum. On one hand the unemployed are on the streets against the Gehlot government, while the opposition has demanded the resignation of Education Minister Govind Singh Dotasra.

Every day a new disclosure is being made in the ongoing investigation of cases of irregularities in Rajasthan Teacher Eligibility Test and attempts to copy. In fact, a photo is becoming increasingly viral in which Education Minister Govind Singh Dotasara and Battilal alias Vikas Meena, who is believed to be the mastermind of leaking the REET exam paper, are seen together. The opposition has raised many question marks on the ruling party regarding this matter.

BJP President Satish Punia recommended a CBI inquiry by holding a press conference on the issue of unemployment and on the Reet exam case. At the same time, demanded the sacking of Govind Dotasara from the post of Education Minister. Poonia said that the invention of Bluetooth in slippers was done in the Ashok Gehlot government under the patronage of Rahul Gandhi, he has played with the future of the youth. Poonia said that Gehlot government failed to stop copying, RPSC has become Congress Public Service Commission. Poonia further said that the BJP will raise its voice through continuous agitation for the youth of Rajasthan to get justice.

At the same time, many unemployed people had made the outline of the movement regarding all the recruitment matters, the leaders of the unemployed were arrested by the police today, even after that some youths sat on a fast unto death at Amar Jawan Jyoti of Jaipur. National Employment Association President Bharat Beniwal accused the government that today Rajasthan has come to the number one position in unemployment in the whole country and the government is claiming to provide employment. The unemployed are crying, when recruitment exams are held, pamphlets are leaked, there is a lot of rigging in recruitment, for protesting, the unemployed are given sticks and thrown in jail.

Beniwal further said that Rahul Gandhi is opposing the central government and asking for recruitment, while in Rajasthan, not a word comes out of his mouth for the Ashok Gehlot government. It is worth noting that about 1.50 lakh recruitment is pending and releases are yet to be issued in the entire Rajasthan.

Also read: After Punjab, political upheaval in Rajasthan too! 4 MLAs who joined Congress from BSP reached Delhi, may join BJP

Also read: Rajasthan: PM Modi laid the foundation of 4 medical colleges, said – thanks to CM Gehlot, this friendship is the strength of democracy

RSS chief Mohan Bhagwat reached Jammu on a four-day visit, will discuss these issues including strengthening the Sangh

Golden Visa: After Sanjay Dutt, Urvashi Rautela got Golden Visa of UAE, know what are its benefits