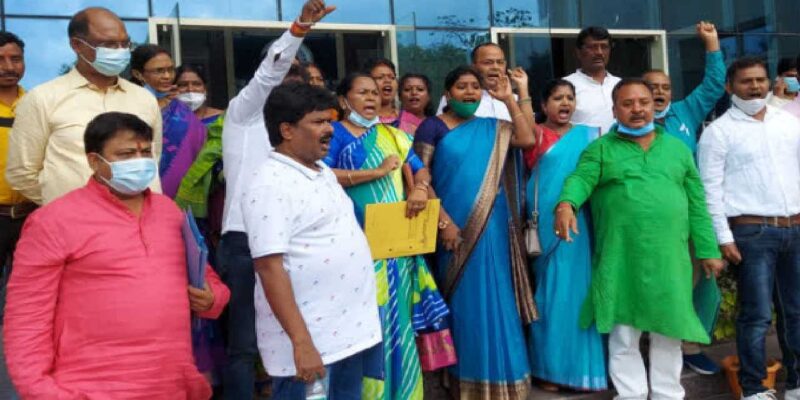 Ranchi, the capital of Jharkhand (Ranchi) in Ranchi Municipal Corporation (Ranchi Municipal CorporationThe meeting of the board of ) was called on Monday after 5 months. But as soon as the meeting started, the officials left. Due to which the meeting could not start, after which the commotion started. Mayor of Ranchi (Mayor) and the councilors, including the deputy mayor, sat on the dharna. The councilors started demanding a meeting of the board. At the same time, the mayor also got angry on this attitude of the office bearers.

Along with this, the officials of Ranchi Municipal Corporation, working against the Mayor by wearing a black badge, insisted that the abusive language used by the Mayor for them. Apologize for that. After that he will come to the board meeting. After which the Municipal Commissioner also urged the office bearers to attend the board meeting and keep their points.

Dispute between office bearers and mayor

The office-bearers came to the board meeting and asked for an apology from the mayor, keeping their points. Regarding this, it was said on behalf of the mayor that forgetting the old things, a meeting should be held anew and work should be done in the interest of the public. But the officials did not agree and then left. During this, Deputy Mayor Sanjeev Vijayvargiya tried to persuade both the sides several times, but the matter escalated and finally all the public representatives have sat on a dharna at the gate of Ranchi Municipal Corporation.

It was said by the councilors that when the public representatives are saying that forgetting the old things and working anew, then the office bearers should accept it. But the officials remained adamant on the insistence. After which all the councilors got angry. All the councilors including the mayor, deputy mayor have sat on a dharna at the gate of Ranchi Municipal Corporation. He is continuously raising slogans against the office bearers. He says that the arbitrariness of the officials will not be tolerated under any circumstances. Along with this, they started protesting near the corporation gate and there was a lot of sloganeering.

Jharkhand: ‘More than 2 lakh houses of Ranchi will be connected with free tap water connection’, announced by Hemant Soren government

Kisan Bharat Bandh: Impact from Delhi to Bihar-Haryana, from Congress high command to workers got along with everyone