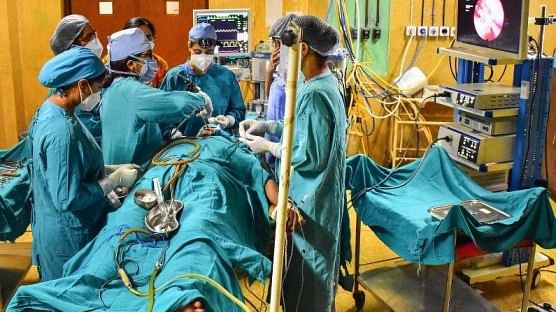 According to the information, there was an abscess on the secret part of a patient living in Barmer. He first went to the government hospital in the district for treatment of boils. Where doctors said that treatment of this disease is not possible here. The victim alleges that VK Goyal, the doctor of the government hospital, told her to go to this private Yash Hospital. That’s where he can be treated.

Operation done by mortgage of house

When he reached Yash Hospital, the doctors there told him that he would have to undergo surgery for this abscess. He will be completely healthy after this surgery. The doctor told the patient that this surgery would cost one and a half lakh rupees. The victim did not have that much money, so he arranged for the money by mortgaging the lease of his house and paid the fee to the doctor. After that his treatment was started.

Private part was cut and got 12 stitches

The victim was given an injection of sedation during the surgery. Later when he regained consciousness, he was surprised. Because his private part was cut about 1 inch. He had about 12 stitches on him. The victim alleges that she was treated by 1 government and 2 private doctors. The doctors ruined his life by being careless. The victim also alleges that she was neither given any receipt of any fee nor was she given full treatment.

The victim lodged a complaint by giving a complaint about this incident to the Barmer SP. The victim alleges that the police is not taking any action in her case. Due to this, he has submitted a complaint to Jodhpur Range IG Navjyoti Gogai on Tuesday.

Boys bought ATM machine from junk, got so much money after breaking that their senses were blown away