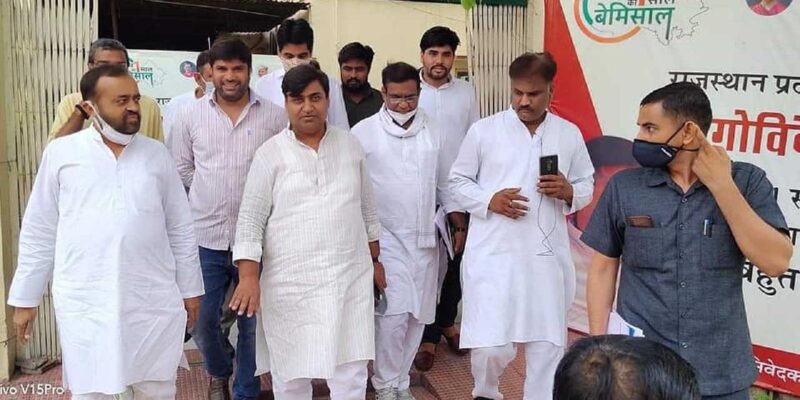 Every day a new disclosure is being made in the ongoing investigation of the cases of fraud and attempts to copy in the Rajasthan Teacher Eligibility Test. The opposition has raised many question marks on the ruling party regarding this matter. In fact, a photo is becoming increasingly viral in which Education Minister Govind Singh Dotasara and Battilal alias Vikas Meena, who is believed to be the master mind of leaking the paper of REET exam, are seen together.

After this photo went viral, now the opposition is alleging that Education Minister Dotsara has got the paper out. The members of the Congress Committee are behind this matter. Smarty Meena from ABVP has shared this photo on social media. After the photo of REET exam mastermind Battilal and education minister came, it has now become a topic of discussion.

This is how the paper leak happened

The paper was leaked even before the closure of NET on the day of REET exam. Battilal first sent the paper to a young man named Ashish. He solved the paper, but later Ashish could not forward it due to mobile internet shutdown. Therefore, he called the police constable Devendra in Gangapur City of Sawai Madhopur by phone and informed him about the paper. After that Devendra took photo of paper from Ashish’s mobile in his mobile and also sent it to Head Constable Yaduveer.

Investigation has revealed that Devendra went to the official residence of another head constable Pushpendra, who was known to him, and told the answer to his wife. At the same time, Ashish got his two sisters copied by sitting in a car. SOG is still investigating where this paper has reached. It has been found in the investigation that this whole matter is related to Ganganagar.

Even after so many revelations in this matter, the Rajasthan government believes that the paper has been successful, but unemployed youth and other opposition parties are questioning the transparency of the paper. Let us inform that in the case of rigging in the exam, the Rajasthan government has so far suspended 20 personnel including two RPS, Ras, 12 teachers, 3 policemen.

Also read- Rajasthan: 16-year-old minor sister was raped by step-brother since childhood, if told to father, then the victim was thrown out of the house

HAU e-weather SMS service: Weather forecast is available for one week, you can also register

Skin Care Tips: Try these 3 remedies to get rid of the blackness of knees and elbows