Rajasthan: An example of national unity was seen in the procession in the state on Ram Navami, the Muslim community showered flowers on the devotees of Ram. 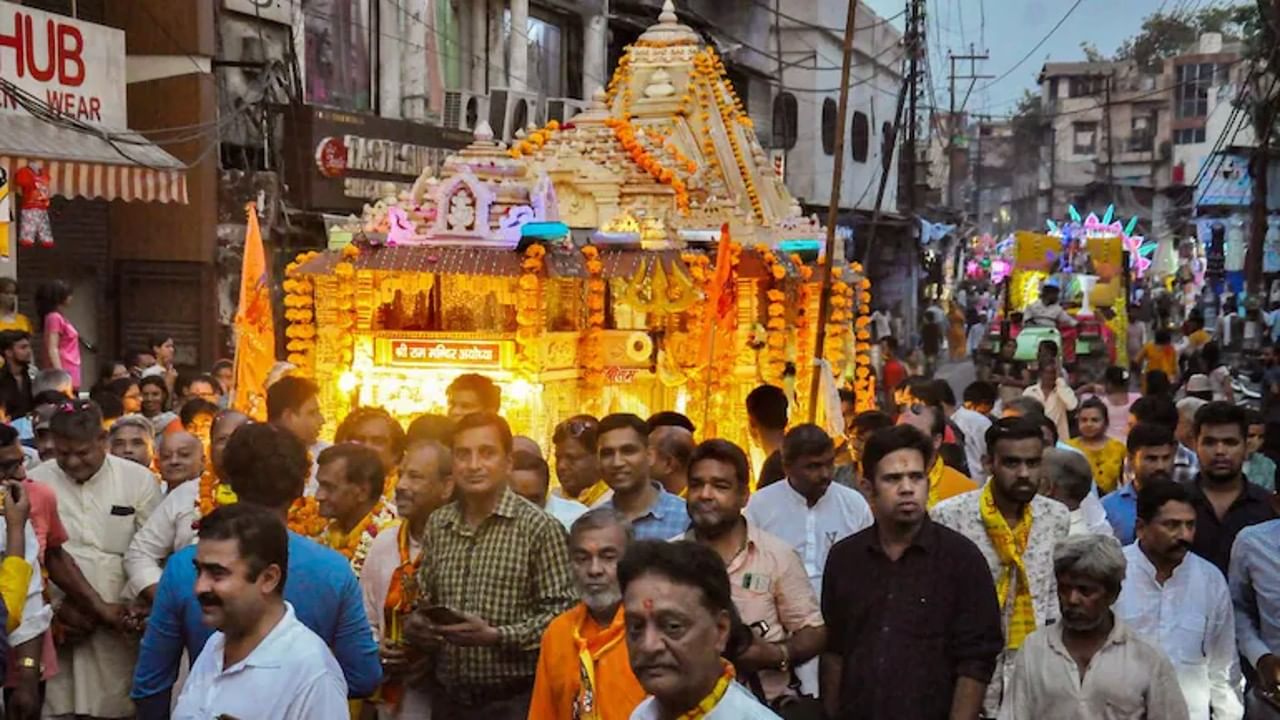 Procession taken out in the city on Ram Navami

On the occasion of Ram Navami, a huge Ram procession was taken out in the capital Jaipur, after which the tradition of 250 years was once again seen on the streets. The tableau of Rangmahal in the main chariot remained the center of attraction during the yatra. Apart from this, procession was organized in many districts including Jodhpur, Ajmer Jaisalmer.

After almost 2 years after the arrival of Corona epidemic, finally the capital Jaipur (jaipur) Ram Navami on Sunday (ramnavmi) Huge procession on the occasion of (ram shobhayatra) Witnessed. Two years later, a grand and huge procession was taken out on the occasion of Ram Navami in Jaipur, after which the tradition of 250 years was once again seen on the streets. After two years from Parkota to Ram Krishna Jayanti Mahotsav Samiti, converted into strong police protection and fortifications, procession from Surajpol Anaj Mandi with gaiety (ram shobhayatra jaipur) was organized. The procession was decorated with about 35 tableaux of Ram. This procession, being taken out by the committee, started from Surajpol Bazar to Ramganj Chaupar, Ramganj Bazar, Badi Chaupar, Johri Bazar, Sanganeri Gate, Bapu Bazar, Chaura Rasta, Tripolia Bazar, Chhoti Chaupar and reached the Ram temple of Chandpole Bazar where thousands of people died. A number of townspeople were present.

Various tableaux based on the events of Shri Ramcharitmanas were prepared in the procession taken out in Jaipur. During the journey, the tableau of Rangmahal in the main chariot remained the center of attraction, in which Ram-Lakshman, in the form of Bharat-Shatrughan, went on a journey to the city after sitting in a royal carriage. Let us tell you that on the occasion of Ram Navami, a grand procession was organized in Jaipur, Jodhpur, Ajmer, Jaisalmer and many other districts. Ministers and MLAs including the general public of the state were also seen absorbed in Ram Bhakti.

Apart from this, a Ram procession was taken out from Chandreshwar Mahadev temple located at Chand Baori in Ajmer district, which included 10 tableaux, 3 Kali Mata akharas, bands and drums. At the same time, the example of national unity was also seen in the Ram Navami procession taken out in Dholpur district. After the implementation of Section 144 in the district, Ram Navami procession was taken out in the city in the presence of District Collector and SP. During the procession, flowers were showered on the people of Muslim society at many places.

Police kept an eye on every corner

After the Karauli violence, Section 144 was imposed in many districts of the state, after which during the Ram Navami procession, the police was guarded from the streets to the roofs of the houses and the top police officers kept an eye on every corner. Along with this, the police monitored the roofs with the help of drones. Apart from the common people, many local MLAs and ministers were also involved in the procession.

read this also : Rajasthan: CM Gehlot targeted Union Minister Shekhawat, said- who is the minister who could not convince PM to work

read this also : Rajasthan: Relaxation in curfew in Karauli from 9 am to 5 pm, but will now be applicable till April 12