Rajasthan: After the murder of his wife, the victim dragged the dead body on the road, the one who saw the CCTV footage shook his soul 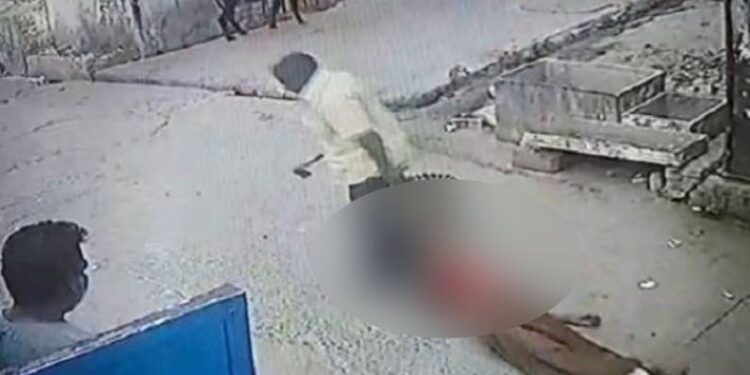 The police have sent the bodies of the woman and the child for post-mortem and are investigating to find out the reason behind the murder.

A young man dragging the dead body after killing his wife.

A case of vandalism has come to light in Kota, Rajasthan, in which a man after killing his wife dragged her body for several meters in the street. His nine-month-old son was also seriously injured in this incident, who later died in the hospital. The police gave this information on Wednesday.

The incident took place in Bhatpara area on Tuesday night and the accused was identified as Sunil Valmiki (40) alias Pintu, he said.
Initially, Deputy Superintendent of Police Ram Kalyan told PTI-Bhasha that Valmiki left his wife’s body on the road and accepted his crime by surrendering to Rampura police station.

According to the police, Sunil Valmiki (40) alias Pintu, a resident of Bhatpara area, brought his wife Seema (35) and nine-month-old son from the relative’s house on Tuesday, and attacked Seema with an ax. given, due to which he died on the spot. Sunil’s nine-year-old eldest son had stayed with a relative.

The deputy superintendent said that after killing the wife, accused Sunil dragged her body 70-80 meters away on the road, due to which there was a lot of fear in the area. Sunil’s newborn son was seriously injured in this accident, who died during treatment at the hospital on Wednesday morning. It is not yet clear how the child got hurt.

The police have sent the bodies of the woman and the child for post-mortem and are investigating to find out the reason behind the murder. Seema and Sunil were married about 15 years ago and had two sons. Sunil works as a daily wage labourer.

Also read- The minister announced that Haridwar would become an international airport by 2030, the government said – we do not know that this is happening in the state