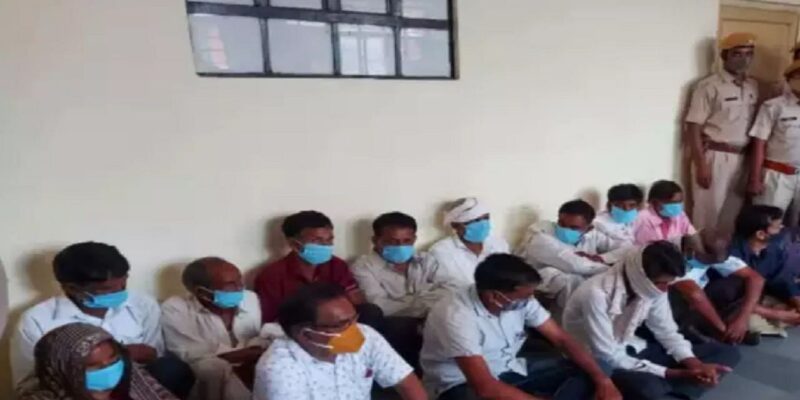 Till now you must have heard about many types of gangs, but have you ever heard about the post mortem gang. It sounds a bit strange to hear but it is true. Not one but many such cases have come to light in Dausa of Rajasthan. Where no person has ever died. The people of this gang have raised a claim of up to Rs 10 lakh in the name of the person on the basis of the fake post-mortem report without causing death. The police have arrested 15 people associated with this post-mortem gang. The arrested accused also include lawyers, policemen, doctors and company surveyors.

In fact, in the year 2016, a case of death in a road accident of a person named Arun, a resident of Delhi, was registered at the police station. In this case the collusion of Investigating Officer Ramesh Chand and Doctor Satish Gupta, who did the post-mortem, Advocate Chaturbhuj Meena has come to the fore. It was found that the person named Arun had not died. He’s still alive. Despite this, his accident was shown and a fake post-mortem report was also made. and then based on
A claim of Rs 10 lakh was also taken through the server of the lawyer and the insurance company.

Not one but many cases came out in the investigation

The case of Arun’s fake post-mortem was disclosed by the police in 2019 itself. In this case, the police had arrested the doctor, policeman, lawyer, after this, not one but many more similar cases came up in front of the police engaged in the investigation of this case. Where even though there is no road accident, a road accident has been shown in the papers. And a fake post-mortem has also been done by telling the person to be dead. After which these cases were also investigated by CID CB and Jaipur Range IG Office. After a long investigation, the police have disclosed a total of 3 cases.

Dausa SP Anil Beniwal told in the press conference that in 2016 a fake accident and fake post-mortem of Ram Kumar Meena, a resident of Bezwadi, was shown. Whereas Ramkumar died 3 months ago due to heart attack. Similarly, in 2016, a fake post-mortem report was prepared by stating the deaths of Janasiram and Nathulal, residents of Bhavta village, in a road accident. While Janasiram died of heart attack and Nathulal died of cancer.

The doctor was reinstated from the case, then the arrest was made in the case

After the disclosure of these cases, the police have arrested a total of 15 people including the accused Dr. Satish Gupta, ASI of police Ramesh Chand, Advocate Chaturbhuj Meena in these cases. These three main accused have been arrested in a similar case in 2019 as well.

In such a situation, the policeman who came out on bail after his arrest has also taken VRS from his job. The doctor was reinstated there. Which the on-duty police has now arrested in other cases. Let us inform that after the arrest of 15 people, about 8 accused are still absconding in this case. The police is now engaged in apprehending the rest of the people.

Today is the last date to apply for 313 posts of Graduate Trainee in ONGC, apply soon

Farmers should earn big by cultivating cloves! Know all the things related to it