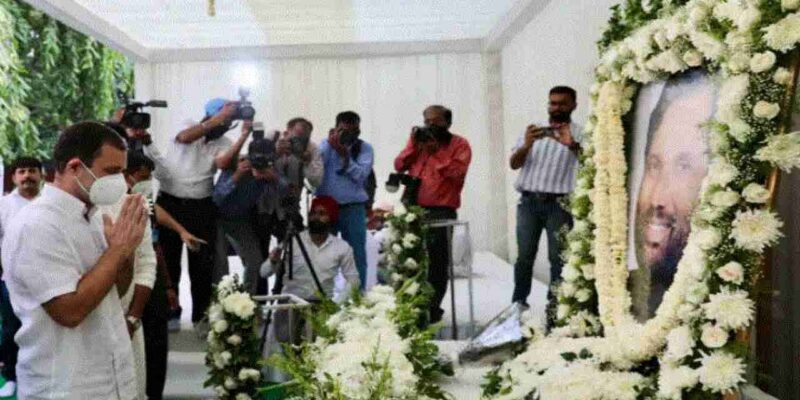 Former Congress president Rahul Gandhi on Friday paid tributes to former Union minister late Ram Vilas Paswan on his first death anniversary and met his son and Lok Janshakti Party (Ram Vilas) leader Chirag Paswan. Rahul Gandhi arrives at Paswan’s residence here. It is also considered important in the sense that many opposition parties are seen trying to increase their proximity to the lamp these days.

This heated meeting of Rahul Gandhi and Lalu Prasad assumes significance in the context that the Congress and RJD are contesting separately in the by-elections to the two seats of the Bihar Assembly and there has been some acrimonious rhetoric between the leaders of the two parties at the state level in recent times. Rahul Gandhi, who reached 12 Janpath, the residence of Ram Vilas Paswan for the last three decades, met Chirag as well as other family members.

The arrival of Rahul Gandhi and Lalu Prasad at Chirag Paswan is important in the context that for some time there is talk of increasing distance between Chirag and BJP. After a dispute between Chirag and his uncle Pashupati Paras, the LJP has split into two. LJP (Ram Vilas) is led by Chirag and Rashtriya Lok Janshakti Party is led by Pashupati Paras. Lalu Prasad and his son Tejashwi Yadav have been urging Chirag to join hands with them. However, sources say that Rahul Gandhi’s visit should not be interpreted as political as leaders of several parties were invited on Paswan’s death anniversary.

Also read-Arunachal Pradesh: Now India-China clash in Tawang, why is the dragon interested in it?

NewsNCR EXCLUSIVE: “24 years ago on June 13, 1997, that fateful evening of ‘Upahar’ when there was no one to cry over the pile of dead bodies”

Lok Sabha Speaker Om Birla meets Puan Maharani, Speaker of Indonesia’s House of Representatives, congratulates her for being the first woman Speaker of the House