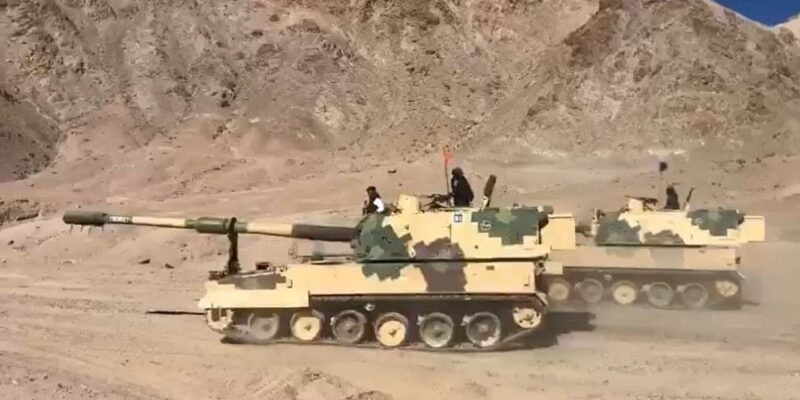 In view of the ever-increasing maneuvers of China, now for the first time in Eastern Ladakh, the Indian Army has deployed the entire regiment of K-9 Vajra guns. The K-9 Vajra cannon can attack enemy positions from a distance of about 50 km. The cannon has been deployed in the forward area of ​​eastern Ladakh, which is at an altitude of 13-14 thousand feet. The deployment of the K-9 Vajra howitzer has been done at a time when the Chinese army is fiercely using drones in the areas adjacent to the Line of Actual Control (LAC).

Earlier this year, the Indian Army deployed three K-9 Vajra cannons in the high mountainous areas of Ladakh, after which they were taken for testing to a military base built in mountainous areas at an altitude of 17 to 18 thousand feet. After successful in the test, the Indian Army can bring about three additional regiments of these automatic guns for mountain missions.

South Korea Howitzer K9 Thunder is the Indian version of K-9 Vajra automatic cannon
– K-9 with a strike range of 50 km can move around at zero radius.
– 155 mm / 52 caliber cannon weighing 45-50 tons can throw a bullet of 47 kg
– Ability to fire 3 shells within 8-10 seconds
– Capable of operating in both high altitude and desert

13th round of military talks tomorrow

Meanwhile, the 13th round of high-level military talks between India and China will be held on Sunday, with a focus on making some progress in the withdrawal process from the remaining points of confrontation in eastern Ladakh. Sources said on Saturday that the talks will start at 10.30 am at the Moldo border point on the Chinese side of the LAC in eastern Ladakh.

You will be able to make payments without internet, the government is going to change the rules for instant transactions

T20 World Cup: Pakistan’s explosive batsman out of the tournament, veteran all-rounder returned to the team after a year