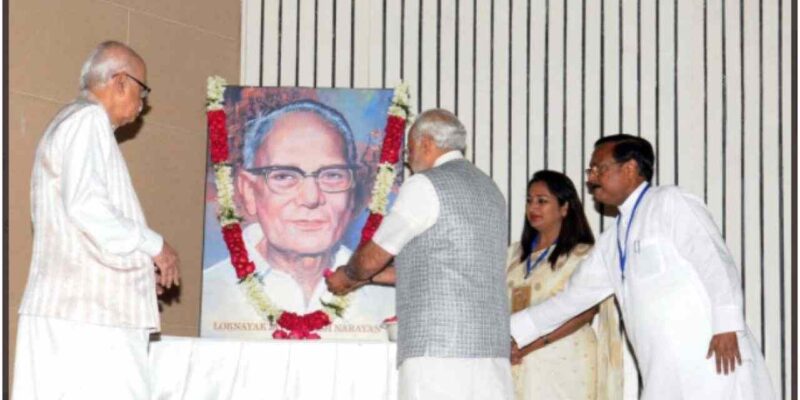 Prime Minister Narendra Modi on Monday paid tributes to socialist leader Jayaprakash Narayan, who led the anti-Emergency movement, and Jan Sangh leader Nanaji Deshmukh on their birth anniversary and lauded their contribution to the country.

In his tweet, he said, “Tributes to Loknayak JP Narayan on his birth anniversary. He was a remarkable personality who has left an indelible mark on the history of India. He dedicated himself to public welfare initiatives and was at the forefront of defending India’s democratic ethos. We are deeply inspired by his ideals. Paying tribute to Narayan, Modi said, lovingly call JP.

Tributes to Loknayak JP on his Jayanti. He was a remarkable personality, who left an indelible mark on India’s history. He devoted himself to public welfare initiatives and was at the forefront of protecting India’s democratic ethos. We are deeply inspired by his ideals. pic.twitter.com/jx7et8MOzJ

Apart from this, he also paid tribute to Nanaji Deshmukh, who is called Chanakya of modern India, on his birth anniversary and said, “Tributes to the great visionary, Bharat Ratna Nanaji Deshmukh on his birth anniversary. He dedicated himself for the development of our villages and empowering the hardworking farmers. I gave a speech in 2017 to mark the birth of Nanaji.

Pranams to the great visionary, Bharat Ratna Nanaji Deshmukh on his Jayanti. He dedicated himself towards the development of our villages and empowering the industrious farmers. Sharing a speech I had delivered in 2017 to mark Nanaji’s birth centenary. https://t.co/KeWUhBvnPt pic.twitter.com/jVkaRo4e9F

It is known that on this day i.e. on October 11, 1902, Indian freedom fighter and politician Jayaprakash Narayan was born. Narayan was a social worker, also known as ‘Lok Nayak’. He was also awarded the ‘Bharat Ratna’ after his death in 1999. Narayan was awarded the Magsaysay Award in the year 1965 in view of his service spirit towards his society. On the other hand, the Patna airport has been named after him due to being the birthplace of Saran in Sitabdiara in Bihar. Apart from this, the Delhi Government’s largest hospital ‘Lok Nayak Jaiprakash Hospital’ is also named after him.

On the other hand, Nanaji Deshmukh was born on October 11, 1916 in Kadoli village of Maharashtra. Born in the lap of Rajabai, Chandikadas Amritrao (Nanaji) Deshmukh left an indelible mark on Indian politics. Nanaji Deshmukh, who is called Chanakya of modern India, also worried about the development of tribals. Nanaji, who started work in East Singhbhum as an experiment, wanted the development plan to be made keeping the tradition of the tribals. For this he also came to Jharkhand many times.

Maharashtra Bandh: Maharashtra bandh today in protest against Lakhimpur Kheri violence, local train service continues, know what is open and what is closed

Quarantine free entry in Singapore to citizens of 11 countries, decision not to give exemption to people going from India