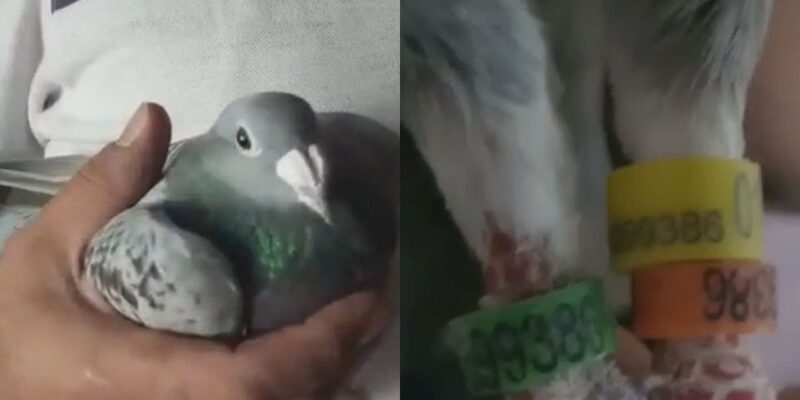 In Bikaner, Rajasthan, the investigation regarding a suspected pigeon that came from Pakistan has not been completed yet.

The investigation regarding a suspected pigeon that came from Pakistan in Bikaner, Rajasthan has not been completed yet. Even after a year and a half, the Chhatargarh police station has not been able to complete the investigation. The Pakistani pigeon has remained a guest of the Chhatargarh Police Station till now. Due to the non-completion of the investigation, the police have to take full care of the pigeon’s food and drink and also the security arrangements. Pigeon is imprisoned in an iron cage for the last one and a half years. Due to being imprisoned there, his weight has doubled. At the same time, he is fumbling to be free.

The suspected Tabutar, who came from Pakistan, was recovered by the Motigarh police of Chhatargarh tehsil about one and a half years ago. The message was written on the wings of this pigeon. Along with this, rings were tied in its feet. After this, the police brought the pigeon to the filter and imprisoned it in the cage. The news of this was also given to the Security Agency. Even after a year and a half in this case, the investigation has not been completed so far. The special thing is that the pigeon has to be specially taken care of. The entire staff, including Dagdish Godara, Duleep, Ashok, of Chhatargarh police station, is stationed according to duty in the hospitality of pigeons.

The suspected pigeon was recovered by the police on 14 March 2020 from the house of Haji Jamal Khan, a resident of Motigarh. His feet were stamped with rings and wings. Charanpur to Lahore 225 km was written on it. Due to the lockdown twice, the investigating agencies could not reach there. Meanwhile, soldiers have been deployed in the police station for the protection of pigeons.

Ashok and Jagdish, the soldiers on pigeon duty, told that all arrangements have been made for their food and water. His health and safety is also being taken care of. He said that due to many criminal activities, there is a problem in care at times. He said that till the time the Sura agencies do not come here, complete arrangements have been made to keep them at the police station level itself. He told that the pigeon will be freed from the cage as soon as the security agency and the investigation report come.

Also Read – Historic! For the first time in the country, the punishment in the rape case trial was on the fifth day, 20 years of imprisonment with a fine of 2 lakhs

Government will not increase the prices of fertilizers, companies were demanding due to cost of raw material