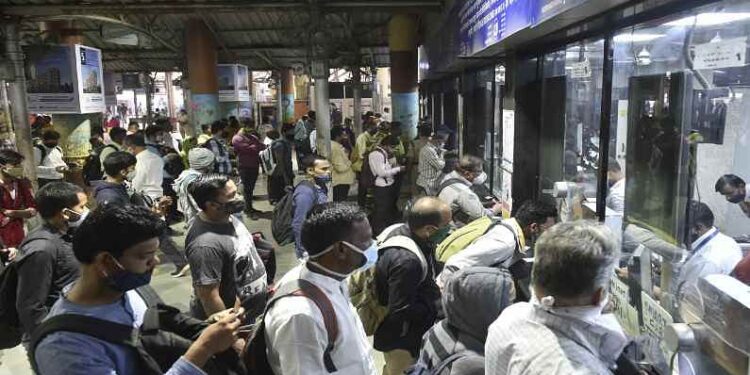 Information is coming to the fore that some of the arrested terrorists had also conducted recce of the Mumbai local train and had the intention of targeting the Mumbai local.

As soon as the local started, there was a huge rush of passengers from the platform to the train.

Yesterday (Tuesday, 15 September) Delhi Police arrested 6 terrorists who were plotting to carry out terrorist incidents in many parts of the country including Delhi and Mumbai. It was also revealed that two of these terrorists were trained in Pakistan and funded by Dawood Ibrahim’s brother Anees Ibrahim to carry out the conspiracies. Not only this, a huge information is coming out that some of the arrested terrorists had also conducted recce of Mumbai local train and they intended to target Mumbai local. After some big information came out in the interrogation of the terrorists arrested in Delhi, Delhi Police Commissioner Rakesh Asthana himself has reached Mumbai. He is in talks with Mumbai Police Commissioner Hemant Nagrale.

Another big disclosure has come to light in the preliminary investigation. There are more sleeper cells in the country trying to carry out conspiracies from place to place, the investigating team fears that. Meanwhile, Maharashtra ATS Chief shared his information in this matter by holding a press conference today. .

Maharashtra ATS organized a journalist council today regarding this whole matter. The ATS Chief said that out of the six terrorists who were caught by the Delhi Police yesterday, one of them is Jan Mohammad Sheikh, a resident of Dharavi, Mumbai. Jan Mohammed has a 20-year-old record of crime. A case was registered against him at Pydhuni police station. That is, Jaan Sheikh has an old criminal background related to beatings and shootings. We are also aware of this. But we have got full information about this conspiracy from Delhi Police.

The Maharashtra ATS chief told that he has a twenty-year-old relationship with D Company in Pakistan. But at the moment, especially in this particular case, we are not in a position to say anything for sure about the underworld connection. Because in the last few years the influence of the underworld has become almost zero here.

But according to Delhi Police, terrorists were planning to take terrorist action in congested areas like Mumbai Local, Dadar, Girgaum Chowpatty. He also did Reiki in some places. Meanwhile, security arrangements have been increased in Mumbai Local and other locations in Mumbai. Maharashtra Home Minister Dilip Walse Patil held an important meeting regarding this and after that it was decided.

Delhi Police Commissioner is in Mumbai in some other connection

Jaan Mohammad Sheikh of Mumbai was arrested like this in Kota

Maharashtra ATS said that on 13th Jan Mohammad Sheikh took Tatkal ticket and on 15th his ticket was confirmed. He was sitting in the train at Mumbai Central station. He was going to Nizamuddin alone by Golden Temple Express train. When the train reached Kota station in Rajasthan, he was arrested. This action of Delhi Police is not our failure. The travel agent who provided tickets to Jaan Mohammad Sheikh has also been arrested.

Jan Mohammad Sheikh alias Sameer Kalia (47) is a resident of Sion area of ​​Mumbai. He is a taxi driver by profession. ATS team is questioning his family. Sheikh lives with two daughters and wife in Kholi number 185 of Kelabkhar in Sion. One of his daughters has completed college education. Another daughter is studying in school.