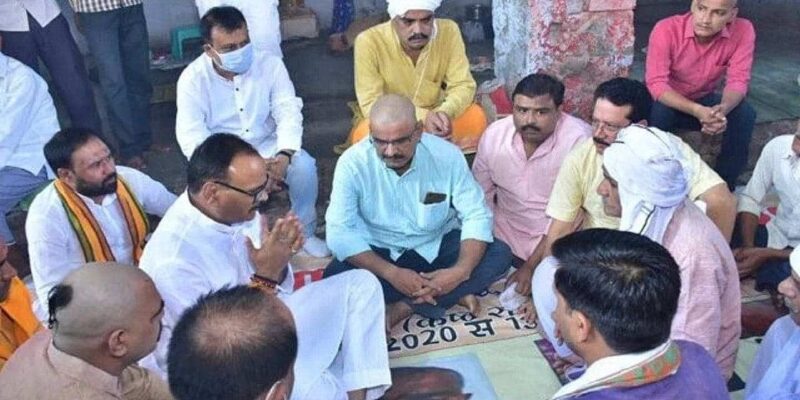 Violence broke out in Tikunia in Lakhimpur district of Uttar Pradesh (Lakhimpur Violence Case) Driver Hari Om Mishra killed in (Hariom Mishra) UP Law Minister Brijesh Pathak to console the family members (Law Minister Brajesh Pathak) reached his house. Pathak assured all possible help by the state government to the victim’s family and expressed his condolences. Law Minister Brijesh Pathak reached the house of elderly Hari Om Mishra, resident of village Parsehra in Fardhan area and assured all possible help to his ailing parents. At present, a team of doctors has reached Mishra’s house due to poor health.

In fact, on October 3, there was violence in Tikunia of Lakhimpur. In this, four farmers died due to being crushed by a car. After which four people were beaten to death by the farmers. In which Hari Om Mishra was also there. At the same time, along with two BJP workers, a journalist was killed by a mob of farmers. After this the politics of the state had heated up. On the other hand, along with the Law Minister, many officers including Superintendent of Police Vijay Dhull and BJP leader reached the house of late Hari Om Mishra.

Hari Om Mishra (Hariom Mishra) After reaching his house, the minister looked very upset after seeing the family situation of his family. After consoling the family of Hari Om Mishra, Pathak also met the family members of BJP worker Shubham Mishra. His tenth rites are being conducted today at the ritual site near Sheetla Devi Temple in Lakhimpur. While visiting the ritual site, the Law Minister inquired about the day of the incident and assured all possible help to the victim’s family.

According to the information, late Hari Om Mishra was the driver of Union Minister of State for Home Ajay Mishra. The condition of his house is very bad and his father’s memory is also weak. At the same time, after the murder of the son, the mother is unable to sleep. At present, seeing the deteriorating health of both, the Health Department has sent a team to Shankarpur Parsehra village of Fardhan, which can check the health of their parents.

Politics heats up about Lakhimpur before elections

In fact, elections are to be held in UP in a few months. But the Lakhimpur violence(Lakhimpur Violence Case) Has heated up the politics of the state. Where the opposition is besieging the government through the death of farmers. At the same time, through the BJP workers who were beaten up by the farmers, the BJP is helping the Brahmin vote bank. Because no leader of the state went to the house of these workers. After which the BJP has got an opportunity to cultivate the Brahmin vote bank. Therefore, under this strategy, the state government has sent Brijesh Pathak to Lakhimpur.

UP Assembly Election: 4 hours long meeting of BJP leaders in Delhi, it will be given in 100 days from 100 programs

MP: By-elections to 1 Lok Sabha and 3 assembly seats on October 30, the fate of 55 candidates at stake; Counting of votes will be held on November 3