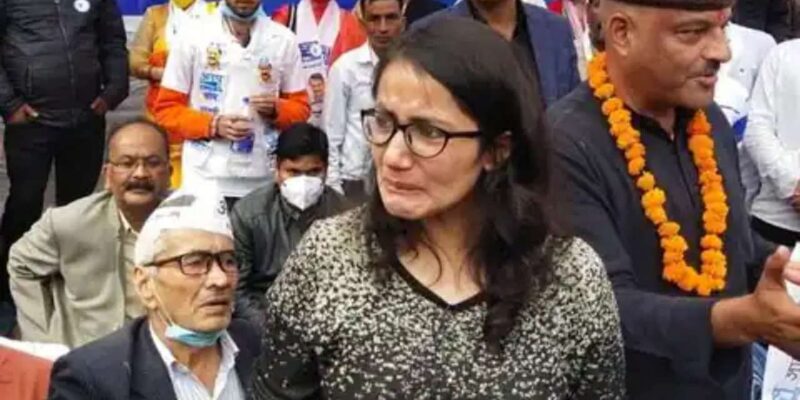 In Nainital, Colonel Ajay Kothiyal attacked the central and state government fiercely. But all this could not be tolerated by a girl present in the program.

Nainital (Uttarakhand Assembly Election 2022In a program of Aam Aadmi Party, something happened that everyone kept watching. In fact, while addressing the AAP workers, Colonel Ajay Kothiyal attacked the central and state government fiercely. But all this could not be tolerated by a girl present in the program. Hearing the evil of PM Modi, she started crying bitterly. As soon as Colonel Kothriyal came down from the stage, a young woman immediately reached the stage.

According to the report of a Hindi newspaper, the girl forcibly snatched the mike from the hands of AAP workers. During this, Colonel Kothiyal fiercely opposed him for doing evil to PM Modi. She started crying on the stage itself, protesting the evils of the PM. On seeing all this, the hands and feet of the workers swelled up. There the commotion started. After which the policemen immediately reached the stage. After a lot of effort, the girl was brought down from the stage.

‘PM Modi is working in the interest of the country’

Colonel Kothiyal has been declared as the CM candidate on behalf of ‘AAP’. On Saturday, he had reached the Maa Naina Devi temple to pay obeisance. After that he started the Employment Guarantee Yatra. ‘AAP’ employment guarantee will be taken out in all 70 assembly constituencies of Uttarakhand. On reaching Nainital, AAP workers took out a bike rally to welcome Colonel Kothiyal.

On reaching Nainital, Colonel Kothiyal garlanded the Gandhi statue and the statue of Pandit Govind Ballabh Pant. He reiterated CM Kejriwal’s promise of providing 300 units of electricity free of cost and unemployment allowance of Rs 5000 to the youth of the state.

Colonel Kothiyal said that employment guarantee journey is being started in Uttarakhand. He said that the Aam Aadmi Party is emerging strongly here. That is why the opposition is furious. Taking a jibe at the BJP, he said that the ruling party is seeing its roots shaken in the state. Along with this, he called the Indian Economy Monitoring Center report fake, in which Delhi has been described as a state of unemployment.

Also read- Uttarakhand: Review meeting will be held every month for 18 days in Uttarakhand Education Department, know what is the planning

Also read-Uttarakhand Assembly Election 2022: The magic of this seat continues since independence, the government is formed by the party whose MLA wins here

This woman extinguishes the candle with her eyes, but the story behind it is very painful