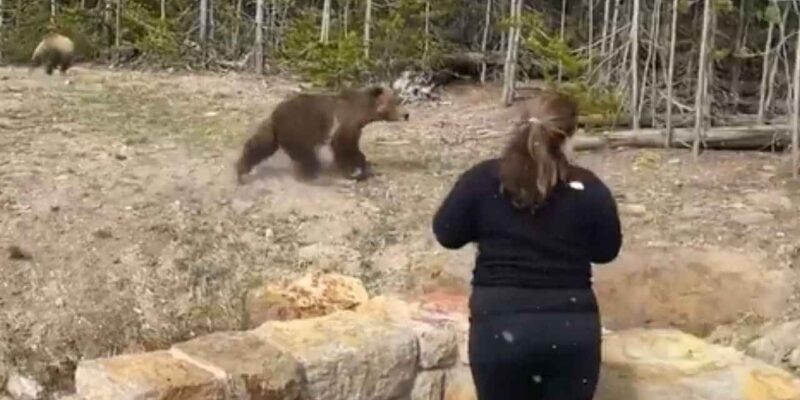 When you are in a wildlife sanctuary, it is not a good idea to go too close to wild animals there. Actually, these animals can attack you. This is the reason why photography is banned by going close to the sanctuary. But ignoring this, an American woman tried to take her photo by going very close to Grizzly Bear. Luckily the bear didn’t attack. However, for this negligence, the woman was sentenced to 4 days in jail, fined a thousand dollars.

According to the information, this incident happened in Yellowstone National Park in the month of May this year, but now a video of it is going viral. In the video, you can see that a woman named Samantha R. Dehring is taking pictures of the grizzly bear and its babies by going very close to them. But the next moment the bear rushes towards Samantha in an attempt to protect her cubs. Samantha was lucky that the bear did not attack her, otherwise anything could have happened. Samantha was also very nervous seeing the bear running towards her.

This video of a few seconds has been shared by Darcie Eddington on her Instagram account darcie_addington. On which there are more than one lakh 30 thousand views. At the same time, after watching the video, people are constantly giving their feedback on it. Most of the users are calling this action of Samantha as silly. Users say that it was their foolishness to risk their lives for some pictures.

Samantha was not only sentenced to jail and fined for this act, but she was also banned from going to Yellowstone for a year. Let us tell you that this national park has clearly written on its website that visitors should stay at least 100 yards away from the enclosure of bears and wolves. But Samantha ignored it and went very close to him.