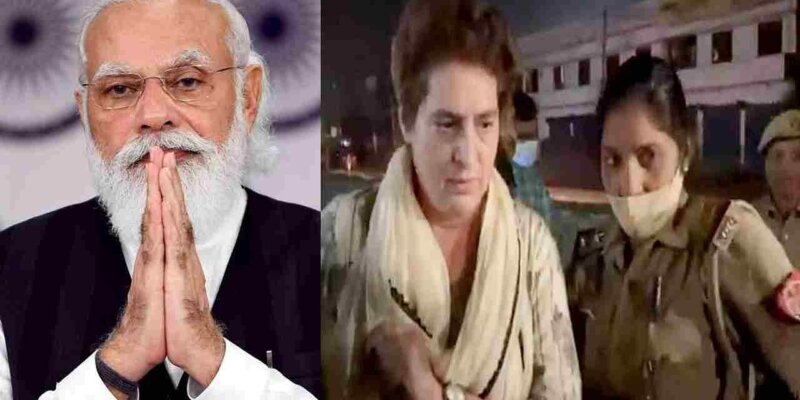 PM Modi gave a gift to the people of UP today, while on the other hand, UP Police has arrested Priyanka Gandhi.

Prime Minister Narendra Modi handed over houses to 75000 beneficiaries of UP, 75 projects worth 4737 crores

Congress leader Priyanka Gandhi, who was in house arrest for the last 36 hours in Sitapur, Uttar Pradesh, has been arrested by the police. Sections of violation of Section-144 and breach of peace have been imposed on Priyanka. Congress has objected to his arrest. Many Congress leaders including Rahul Gandhi have opposed this. Priyanka Gandhi asked questions to PM Narendra Modi by sharing a video related to Lakhimpur violence on Twitter. Priyanka Gandhi had announced that the police could arrest her if she wanted, but she would not return without meeting the farmer families.
Click to read full news

In a village in Vijayanagar district of Karnataka, 6 people have died, while 150 people are hospitalized after drinking contaminated water. The state government on Tuesday announced an ex-gratia amount of Rs 3 lakh to the families of those who died after drinking contaminated water in a village in the newly created Vijayanagar district. Along with this, orders have also been given to investigate the deaths. The incident took place in Makarabbi village of Huvina Hadgali taluk. Karnataka Chief Minister Basavaraj Bommai said, “Our government has taken seriously the people who die and fall ill by drinking contaminated water. The investigation will be conducted under the leadership of IAS officer Munish Moudgil. He has to submit the report in a week.”
Click to read full news

The Drugs Controller General of India (DCGI) has approved the Phase-3 clinical trial of indigenous pharma company Zydus Cadila for its two-dose COVID-19 vaccine ZyCoV-D (ZyCoV-D). The company said in a statement, ‘The Phase III trial of the two-dose COVID vaccine has been approved.’ ZyCoV-D is the world’s first DNA vaccine against COVID-19. Jaykov-D is also the first indigenous vaccine, which was also tested on children. Its three-dose vaccine was approved for emergency use in August.
Click to read full news

In the 51st match of IPL 2021 (IPL 2021), the competition between Rajasthan Royals and Mumbai Indians (RR vs MI) is going on. In this match being held in Sharjah, Mumbai captain Rohit Sharma won the toss and decided to bowl first. The team benefited from this and Rajasthan’s batting was shattered in front of the tight bowling. For only 50 runs in 10 overs, the team had lost all five wickets of the top order including captain Sanju Samson, Yashasvi Jaiswal. James Neesham and Nathan Coulter-Nile have taken 2-2 wickets so far, while Jasprit Bumrah has got one wicket.
Click to read full update

Lakhimpur Kheri incident: Audio message of Priyanka Gandhi from PAC guest house, resignation of Minister of State for Home and will fight till the arrest of son