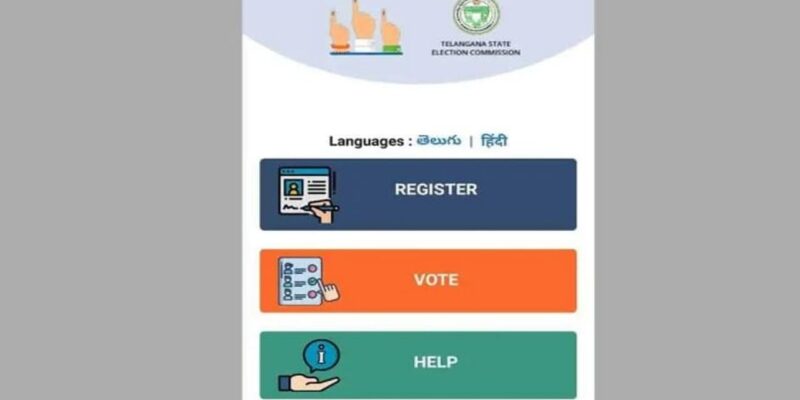 Telangana on Wednesday said it has created the country’s first smartphone-based ‘e-voting’ app keeping in mind the COVID-19 pandemic.
The government said in a statement that this app has been successfully developed and ‘dummy’ (fake) elections are being conducted in Khammam district to test it. For this, registration will be done on this mobile app from October 8 to 18 and then there will be fake voting on October 20.

All citizens of the district will be allowed to participate in fake voting. On this initiative, Telangana State Election Commission (TSEC) is working closely with the state’s Department of Information Technology and Center for Development of Advanced Computing (CDAC). The objective of the e-voting app is to provide voting facility to that section of voters which includes persons with disabilities, senior citizens, people engaged in essential services, sick people, polling personnel and IT professionals.

Why had to make e-voting app?

In view of the COVID Mahamahi, online voting is being arranged. There are many sections of the society in Corona who are unable to leave the house to vote. In order to secure the voting rights of these people, this e-voting app has been developed. IIT Bhilai Director Prof. Rajat Moona has a big role. Rajat Moona is also the Technical Advisor of the Election Commission of India. Many professors from IIT Bombay and IIT Delhi have contributed immensely in creating the e-voting app.

App will work on these 3 factors

The e-voting app will have a three-factor verification process that will identify the valid voter so that bogus voting does not take place. Through the authentication process, first the name will be matched with the Aadhaar, the voter is alive, it will be identified and the photo of the voter will be matched through the EPIC database. A database of 15-20 years has been prepared for matching the picture so that if a person has made a voter ID even 15-20 years ago, there will be no difference in the picture.

use of artificial intelligence

Blockchain technology will also be used in mobile so that a complete account of votes can be kept. Minimal design has been kept in this app so that people do not get confused. This app will work in English and Telugu language. How to use the e-voting app, for this, it has been explained by giving a video on the app. A helpline number has also been given to help the people. Artificial intelligence and blockchain technology are being used extensively in government work these days. Due to this people are being given facilities sitting at home. New technology is making it easier to provide transparent and corruption-free service to the people. The government is using it vigorously in many of its technical projects. Telangana’s e-voting app is one such example.

Read also: The government started this special scheme, give yellow bulbs and take LEDs… the price is only this much rupees