Nikhil Jain issued a statement after Nusrat Jahan’s allegations, clarified about separation from marriage and money 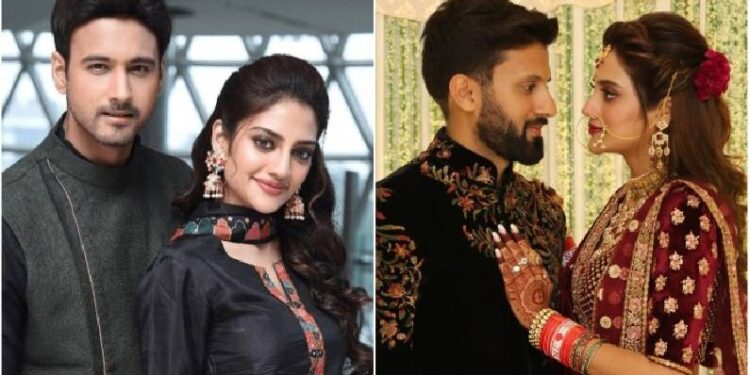 Earlier on Wednesday, Nusrat Jahan issued a statement saying that it was not a marriage, but a live-in-relationship.

Her husband Nikhil Jain has issued a statement after Bengali film actress and Trinamool Congress MP Nusrat Jahan alleged that her marriage was illegal. Nikhil Jain said that he had appealed to Nusrat several times to register the marriage, but Nusrat ignored it time and again. Earlier on June 9, Nusrat Jahan announced her separation from Nikhil Jain by issuing a statement and said that their marriage is not legal. Nusrat and Nikhil got married on June 19, 2019 in Turkey.

Nikhil Jain said that Nusrat’s behavior towards him started changing from August 2020, when she was on the shooting of a film. “Disappointed by the allegations against me and my family, as well as my married life, I felt it necessary to bring out some facts,” he said. He has put his facts publicly through 9 points.

1. After falling in love, I proposed marriage to Nusrat which she happily accepted. And after that we went to Bodrum, Turkey in June 2019 for the destination wedding. Later a reception was also held in Kolkata.

2. We lived together as husband and wife and presented ourselves as a married couple in the society. I spent all my time and resources as a dependable and accountable husband. Friends, family and people close to us all know what I have done to her. My unconditional support for that has been undisputed. However, after a very short time, he changed his attitude towards marriage with me.

3. From the time of shooting a film from August 2020 onwards, my wife’s behavior towards me started changing. The reason for this would be well known to him.

4. During their stay together, I requested her to register the marriage several times, but she kept ignoring it.

5. On 5 November 2020, she left with her personal belongings, bag, paper and documents and shifted to her Ballygunge flat. After that we never lived together as husband and wife. The rest of his personal belongings and papers were also sent after some time.

6. I was saddened to read about his outings in various media reports and felt cheated. After this, on 8 March 2021, I filed a civil suit in the Alipore Court to annul my marriage.

7. Since this matter is pending before the court, I was avoiding to give statement about my personal life and even today I am not able to explain it in detail. But his recent statements compelled me to put forward some facts.

8. After marriage, I had sent money from my family account to his account to reduce the home loan interest burden on him. This was done with the thought that when the money comes to her, she will return it to the establishment. Any money sent by him to my family account is the same. Still some money is left to pay. The allegations leveled by him are baseless, derogatory and beyond the truth. No one needs to prove the truth, my bank statement and credit card statement are enough as proof. My family had adopted her as a daughter, not knowing that we would see such a day.

9. I appeal to the media in this situation not to comment on his personal life and the matter under the court.

Nusrat Jahan had made allegations

Earlier on Wednesday, Nusrat Jahan issued a statement saying that it was not a marriage, but a live-in-relationship. He had said that their marriage took place according to the laws of Turkey, which is not valid in India. He had said, “We both separated long ago. Since the marriage was not valid, the question of divorce does not arise in it. I didn’t talk about it earlier because I wanted to keep it limited to my personal life.”

Nusrat had also alleged that some of her belongings such as family jewelery and other items were kept “illegally”. He had also said that money was transferred from his bank account without his knowledge. The name of Nikhil Jain is registered on the website of Lok Sabha as the husband of TMC MP Nusrat Jahan.

Also read- Vaccine Update: People suffering from old age or serious illness should get priority, it is ignorant to apply corona vaccine to everyone: Health experts

Also read- Kerala: After posting the video on Instagram, putting kerosene on the live-in partner, set fire, the woman died in the hospital