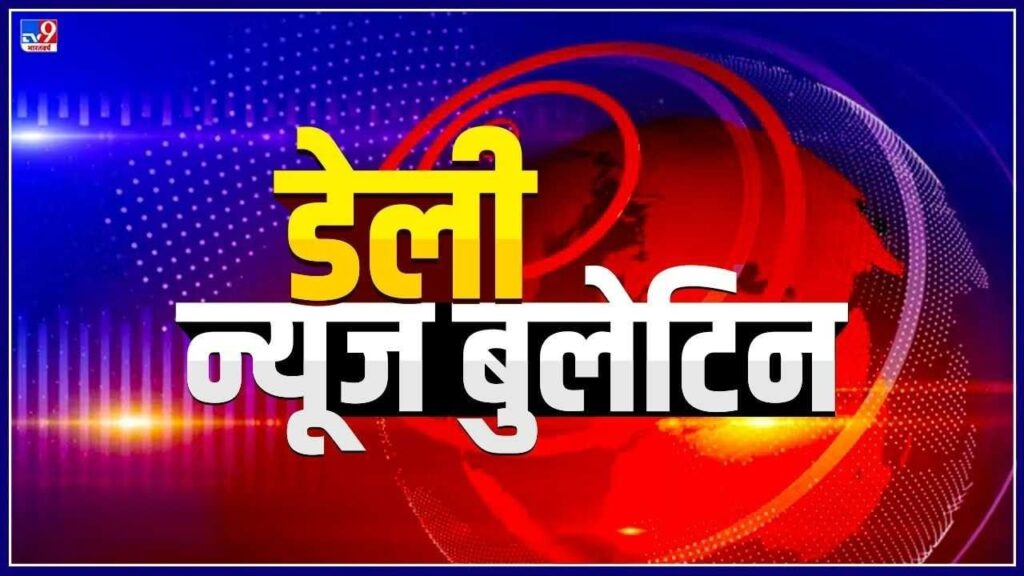 Every day many big events happen in the country and the world. In the rush of news, many times we miss the big news of the day and we do not know about that news. news bulletin (News Bulletin) In this we will tell you every big news, which dominated from TV to websites and social media in the last 24 hours.

Punjabi film actor Deep Sidhu died in a road accident. Deep was returning from Delhi to Punjab with his friends. During this, his car became a victim of an accident. This accident happened near Kundli border. Deep was going in his Scorpio car when his car collided with a truck parked on the side of the road. According to the police, the accident happened near Pipli Toll Plaza at KMP. Deep Kisan became very popular during the movement. He had given his share in the peasant movement.

Russia ready to attack Ukraine from all sides

Today in the whole world only Russia Vs Ukraine Crisis is discussed. How many Russian soldiers are present on the Ukraine border? How many bomber planes of Russia are on stand by mode? How many Putin’s ships have landed in the Black Sea? How many Russian battle tactical groups are on the ground? Have preparations been made to annex Ukraine via Belarus and Crimea? How many months’ worth of ration did Russia collect? Did the President of Russia give the final order of war? Russian army will attack Ukraine. It is claimed that there will be an attack with the intention of occupying Ukraine with about 2 lakh soldiers. That is, about 1 lakh 40 thousand soldiers of Full Invasion Russia are stationed near the South and Eastern Ukraine border.

Team India will play Day-Night Test match after one year

The schedule of T20 and Test series between India and Sri Lanka has been announced. The Board of Control for Cricket in India on Tuesday 15 February informed about the schedule of the series between the two teams, which will start with T20 matches from 24 February. The most important thing about this series is the return of the Day-Night Test match. The Indian team will play Day-Night Test match again after a gap of one year. This match will be played in Bangalore from March 12.

Approval for setting up G20 Secretariat

The Union Cabinet on Tuesday approved the setting up of the G-20 Secretariat, so that necessary arrangements can be made for India’s chairmanship of this prestigious group. India will chair the G-20 from 1 December 2022 to 30 November 2023. This term of chairmanship will end with the G-20 summit to be held in India in 2023. The G20 is a major forum for international economic cooperation, which plays an important role in global economic governance. The proposal was approved in the cabinet meeting chaired by Prime Minister Narendra Modi.

Look out circulars (LOCs) have been issued against the directors of ABG Shipyard in a loan fraud case of Rs 22842 crore, a senior CBI official said on Tuesday. Officials said that notices have been issued to prevent the accused in the case from leaving the country. The CBI said searches were conducted at 13 places on February 12. During this many documents were recovered. Bank account details of the accused as well as the concerned parties were found.

Telangana Chief Minister K. The matter is getting heated after Chandrashekhar Rao’s remarks. Following criticism from several Union ministers and leaders, Assam Police sources are now reported to have reported that based on complaints from several BJP supporters, the Assam Police has sought evidence for the surgical strike against the Telangana Chief Minister and the army. A case has been registered for insulting.

The ED team has gone after a four-hour raid from the house of underworld don Dawood Ibrahim’s sister Haseena Parkar. On Tuesday, the ED conducted raids on 10 places related to Dawood Ibrahim. Of these, 9 are Mumbai bases and 1 Thane base. This action has been taken by the ED on the basis of the FIR filed by the NIA and the information given by the Intelligence Department. These raids have been conducted under PMLA laws regarding money laundering and hawala cases. In these raids, efforts are also being made to get information about the connection of a big leader of Maharashtra with D Company.

Shirdi’s Sai Baba temple on the radar of terrorists

The 57-member Organization of Islamic Cooperation has expressed deep concern over the protests by Hindu organizations over the hijab controversy against Muslim women in India. The organization condemned the demonstration regarding the hijab, saying that ‘Islamophobia’ is increasing in India. The group has urged the international community, including the United Nations, to take all necessary measures to stop the growing anti-Muslim riots in the country with a population of more than 1.35 billion.

A bad news has come for the people associated with the entertainment world. Famous Bengali singer Sandhya Mukherjee has died in a private hospital in Kolkata. A few days back, he was admitted to the hospital due to health issues. His condition was stable but today the news of his death has put the music industry in mourning. There is a wave of mourning among his fans with the news of his passing. Sandhya Mukherjee, who fascinated her with her melodious voice in the 60s and 70s, has given many great songs. He not only made his mark in the Bengali industry, but also won great respect among the people associated with music from all over the country.

Taapsee Pannu has become a well-known actress of Bollywood. He has impressed everyone with his characters in the last few years. In each of his films, his character is different and special. Taapsee now chooses such films in which her character is presented as a main character. Once again Taapsee has come among the audience with another strong character. His film ‘Loop Lapeta’ has been released on Netflix on Tuesday. Tahir Raj Bhasin is also seen with him in his film.