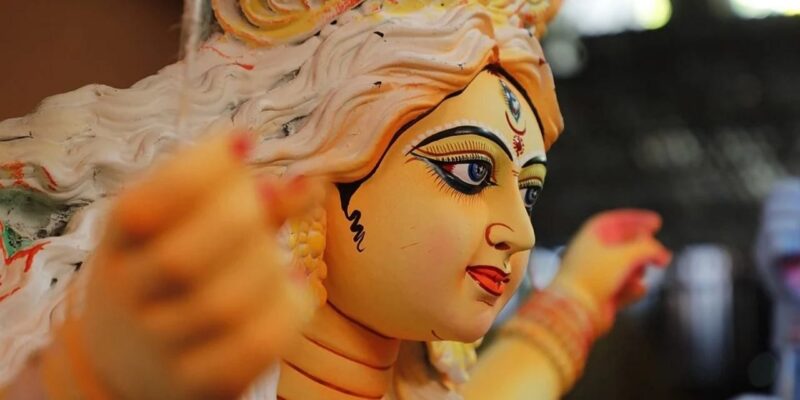 Navratri is one of the most prominent Hindu festivals in India, which is celebrated with great enthusiasm and enthusiasm. During this time, ardent devotees observe a nine-day fast and visit revered Durga temples to worship Maa Shakti (a form of Durga). This is also the time when there is an influx of religious travelers to the major Shaktipeeths of the country.

Let’s have a look at some of the most prominent Durga temples in India:

It is one of the most sacred temples in India, where Hindu devotees from all over the world come. Situated in the Katra district of Jammu and Kashmir, this temple is crowded with pilgrims throughout the year. It is believed that Mother Durga resides inside a cave here in the form of rocks. The temple is at a climb of 13 km from Katra.

Reaching Vaishno Devi: Katra railway station is about 20 km away from the temple. Pilgrims can go trekking, take a horse or book a helicopter to reach the temple.

According to Hindu mythology, this temple is built on the spot where the right leg of Mata Sati fell. This temple is located in the city of Udaipur (formerly known as Rangamati) in the North East Indian state of Tripura. Devotees offer prayers to Maa Kali, who is worshiped as Soroshi in the temple.

Reaching Tripura Sundari: The temple is about 60 km from Agartala and is easily accessible by local transport and cabs from any part of the city.

According to popular belief, the breast of Mata Sati fell at the place where the temple is today. The temple is a religious place in Gaya and during the Navratri festival, grand celebrations take place here.

The temple is built at the place where the left hand of Mata Sati had fallen. It is not only a Shakti Peeth, but also one of the six places where devotees come to fulfill their wishes. The idol of Mata Mahalakshmi is carved in black stone.

Reaching Mahalaxmi Devi Temple: The temple is only five kilometers away from Kolhapur Railway Station and regular taxis and buses are available.

This temple is also famous as Hara Sidhi Mata Mandir. It is said that where there is a temple, the upper lip of Mother Sati fell. This is a major Shakti Peeth temple in India.

Reaching Maha Kali Mata Temple: It is a major temple of Ujjain and is easily accessible by local transport from any part of the city. The nearest airport is located at Indore, which is approximately 56 km away.

This hill top temple is one of the most prominent Shakti Peethas in India. It is believed that the temple is built at the same place where the vagina of Mother Sati fell. Here you will find a cave with a small statue of Yoni. Navratri is one such festival which is celebrated with great enthusiasm and during this time there is a huge crowd in the temple.

Kolkata is known for its majestic Navratri and Durga Puja celebrations. Kalighat temple is built at the place where the right toe of Mata Sati fell. Every year in April and October (Navratri month) lakhs of devotees visit the temple. Situated on the banks of Adi Ganga, this temple is more than 2000 years old.

Reaching Kalighat Temple: The temple is about 11 km from the main railway station of Kolkata and is easily accessible from any part of the city by local transport.

One of the most revered sites in Himachal Pradesh, Jwala Devi Temple is about 40 km south of the Kangra Valley. The temple is famous for its nine eternal (permanent) flames, which are named after the nine forms of Mother Shakti.

Reaching Jwala Devi Temple: The temple is about 46 km away from the Kangra airport, while Pathankot is the nearest railway station, which is located at a distance of 114 km. Taxis are easily available from there.

This temple dedicated to Mata Danteshwari is one of the major attractions of the state. It is believed that a tooth of Mother Sati had fallen at the place where the temple was built. One must attend Navratri celebrations in this part of the country as an elaborate procession is taken out here.

Reaching Danteshwari Temple: The nearest airport is located at Raipur which is about 292 km. Buses and taxis are available from outside the airport to the temple.

Situated on the top of Chamundi hills in Mysore, this temple is built on the spot where the hair of Mother Sati had fallen. The architecture of the temple is incredible and every year a large number of devotees come here from far and wide.

Reaching Chamundeshwari Temple: The temple is only 13 km away from Mysore. Taxis and buses are easily available from Mysore to the temple.

Also read- Navratri 2021: To solve all the problems of life, recite Durga Saptashati according to the zodiac

‘Navjot Singh Sidhu should observe a permanent silence, this will give peace to both the country and the Congress’, said Haryana Home Minister Anil Vij

Pusa Decomposer is playing an important role in reducing the incidents of stubble burning, know how it works