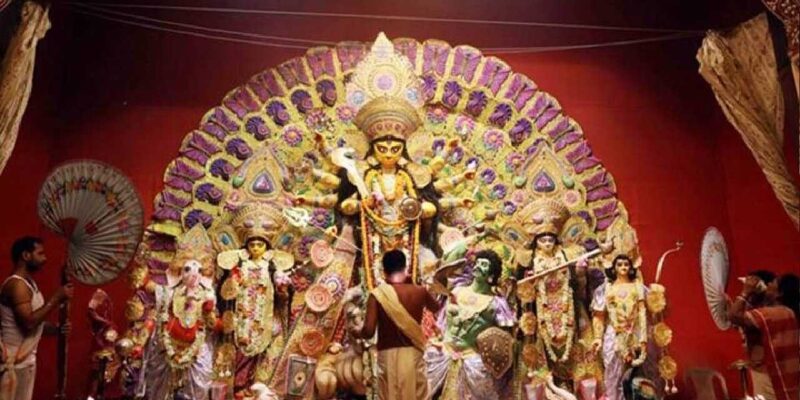 Statue of Maa Durga during Durga Puja in Kolkata.

Devotees in West Bengal offered ‘Pushpanjali’ on Maha Ashtami on Wednesday morning and performed rituals like ‘Kumari Puja’. While the priests chanted mantras over loudspeakers and the organizers engaged in managing the crowd at Durga Puja pandals. During this, many big personalities also reached the pandals and worshiped. Several VIPs including former Indian cricket team captain Sourav Ganguly, Leader of Opposition Shubendu Adhikari also offered ‘wreaths’.

Unlike last year, this year people have taken both doses of the anti-Covid 19 vaccine. Due to which a lot of enthusiasm was seen among the people this year. Partha Ghosh, a founding member of the Forum for Durgotsav, the apex body for community worship organizers in the city, said people needed some relief from the restrictions imposed in the last one-and-a-half years.

Corona cases may increase after the festival

Ghosh, an office-bearer of the Shiv Mandir Puja Committee, said, “The number of visitors to the pandals is definitely higher this time than last year, as people are no longer scared of COVID-19 after taking a dose of vaccine.” However, amid speculation that the cases of COVID-19 may increase after the festival. Due to which the organizers and policemen were seen urging some places to avoid crowds and wear masks at all times.

In north Kolkata, an organizer of the Bagbazar Sarbojonin Durga Puja committee was heard telling people on the mic, “Please follow the COVID-19 protocol for your safety. You don’t need to see all the pandals this year. Don’t stay out of the house all day. On the other hand, during the day on Mahaashtami, women were seen preparing for ‘Sandhi Puja’. Former Indian cricket team captain Sourav Ganguly offered ‘wreaths’ at Barisha Players Corner. While Leader of Opposition Shubhendu Adhikari paid obeisance at a community pandal at Kanthi in East Medinipur district, Trinamool Congress spokesperson Kunal Ghosh offered ‘wreaths’ at the Rammohan Sammilani puja pandal in north Kolkata.

Also read: Kolkata Durga Puja: Laser show canceled in Durga Puja pandal on the lines of Burj Khalifa, know what is the reason