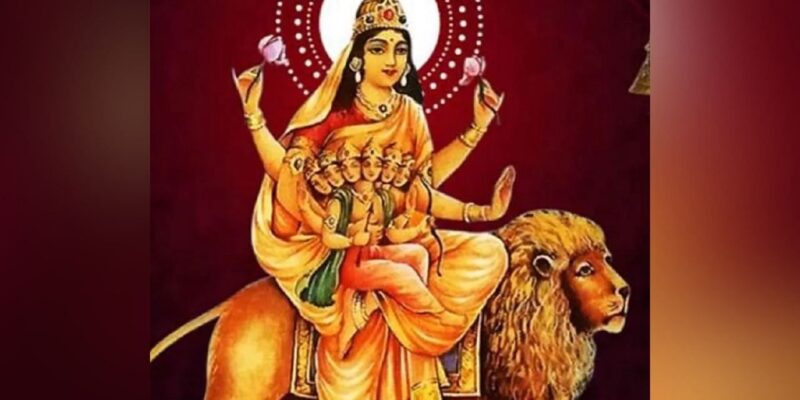 Today, on the fifth day of Navratri, Skandmata is worshipped. According to the Panchang, today is the Panchami date of Shardiya Navratri. On this day, Goddess Durga is worshiped as the mother of Lord Skanda. Lord Kartikeya is also called Skanda. It is believed that worshiping Skandmata gives birth to children and opens the doors of salvation.

It is believed that by worshiping Skandmata, the sufferings on the child end. Yellow colored things should be offered to the mother. Wearing yellow colored clothes on this day is considered auspicious. Mother has taken Skanda in her lap in this form. He has four arms and holds a lotus flower in the upper right hand. She wears a lotus in the upper arm of the left side and the lower arm is in groom posture and from the lower arm is held in the lap of Skandakumar. Let us know the worship method of Skandmata, about the mantras.

Today, on the fourth day of Navratri, install the picture or idol of Mother Skandmata, the fifth form of Maa Durga. After this, purify the idol by sprinkling Gangajal. After this, offer vermilion, roli, incense, fruits, flowers, naivedya. Then recite Durga Saptashati or Durga Chalisa. After that chant the mantras of Skanda Mata and finally do aarti.

Chant the mantras of Skandmata

Banana should be offered to Skandmata. Donate bananas to Brahmins after offering it to the mother. It is believed that by doing this all your wishes are fulfilled and happiness and prosperity resides in the house.

Also Read – Zodiac Signs: People of these three zodiac signs think too much, know about their zodiac sign

Also read – Navratri 2021: To please Goddess Lakshmi, do these 5 measures in Navratri, the money crunch will go away

Girija Devi Temple: In the middle of the river is the holy abode of Mother Girija, where once lions used to circumambulate.